‘AgVocate of the Year’ Award Nominations Due January 6 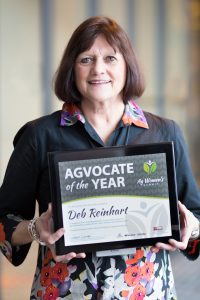 Nominations are open for the 2017 AgVocate of the Year award, to be named at the Wisconsin Ag Women’s Summit held on March 10-11, 2017. Women nominated must actively and positively promote agriculture in their community and examples of their advocacy efforts must be captured in the application submitted. To nominate a deserving woman, download the application at wiagwomenssummit.com.

Applications are due January 6, 2017. Nominated individuals must reside in Wisconsin and must be part of an agriculture enterprise, agribusiness, farm and/or commodity organization that operates in Wisconsin. The 2017 AgVocate of the Year will receive $500 cash and $500 will be donated to the agriculture charity of her choice, sponsored by The Fabulous Farm Babe, Pam Jahnke. Past award winners include: Deb Reinhart (2016), Nodji Van Wychen (2015), Laura Daniels (2014), Karyn Schauf (2014) and Daphne Holterman (2013).

The selected recipient will be honored at the 7th Annual Wisconsin Ag Women’s Summit, hosted by Badgerland Financial, Wisconsin Farm Bureau Foundation and University of Wisconsin Extension at the Madison Marriott West.