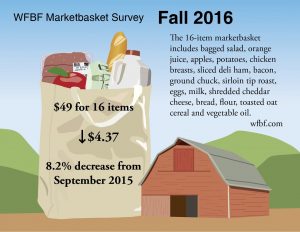 That’s the finding of the Wisconsin Farm Bureau’s Marketbasket survey that tracks the average cost of $49 for 16 food items used to prepare one or more meals. The survey items cost 8.2 percent less than one year ago and 1.4 percent less since March.

“Strong global supplies have depressed the prices that Wisconsin farmers receive for the crops and livestock they raise,” said Casey Langan, spokesman of the Wisconsin Farm Bureau Federation. “Coupled with steady energy prices and softening demand from foreign countries, this means lower costs for grocery shoppers.”

The decreasing price of eggs was the single largest factor in lowering the survey’s average price.

One year ago, one dozen Grade A eggs averaged $2.94. That historically-high price was a result of a tight egg market after Avian influenza led to the death of millions of laying hens. Since then, egg producers have repopulated their flocks and increased egg production.

“The 98 cents per dozen that Wisconsin shoppers paid (on average) in September marks a return to normalcy for the egg market,” Langan said.

“The growing inventory of beef cattle has resulted in lower prices for consumers,” Langan said. “The survey’s average price for a pound of ground chuck dropped from $4.74 to $3.99 (15.8 percent) during the past year.”

An over-supply of milk globally had a dampening effect on the price Wisconsin dairy farmers received for their milk (the lowest since 2009). The reduced price has been passed on to the consumer. Shredded mild cheddar cheese decreased by 5.3 percent (from $4.30 to $4.07 per pound) during the past year. Likewise, a gallon of whole milk dropped by 15 cents (from $3.47 to $3.32) or 4.3 percent during that time period.

Bagged salad was the only item on the survey that has consistently increased in price during the past year. The average for a one-pound bag was $2.46 last fall, $2.55 last spring and $2.78 in the most recent survey. Dry conditions in lettuce-growing regions have resulted in reduced crops, which impacts price.

Similar production shortfalls of apples and potatoes caused prices to increase on the state and national level.

FARMER’S SHARE IS JUST $7.84
During the last three decades, retail grocery prices have gradually increased while the share of the average dollar spent on food that farm families receive has decreased. In the mid-1970s, farmers received about one-third of consumer retail food expenditures in grocery stores and restaurants. Since then that figure has decreased steadily and is now about 16 percent, according to the U.S. Department of Agriculture. Using that percentage across the board, the farmer’s share of this quarter’s $49 grocery bill is $7.84.

The USDA says Americans will spend approximately 10 percent of their disposable annual income on food, the lowest average in the world.

The Marketbasket survey is a quarterly look at the trends in food pricing in Wisconsin in relation to changing farm prices, weather and wholesale and retail food marketing. Members of the Wisconsin Farm Bureau collected price samples of 16 basic food items in communities across Wisconsin during September.