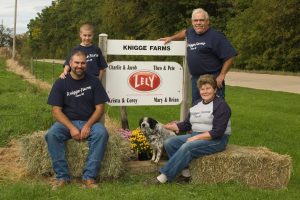 Knigge Farms is no stranger to visitors.

The farm routinely welcomes school and church groups as well as travelers from across the country and around the world to tour the family dairy business. But last fall, the families opened their barn doors to an entirely different audience.

“A show like The Bachelor is a huge production,” said Pete Knigge, co-owner of Knigge Farms LLC. “We didn’t know what we were getting into. Fortunately, as the audio and video crew set up in our barn, the technology of the robotic milkers allowed the cows to be milked while the filming was taking place. We hosted the cast and crew and all of the family members pitched in as told our farm story.”

Knigge Farms is a dairy and crop farm with 600 acres of alfalfa, corn, soybeans, oats and wheat; 130 milking cows; and 170 heifers, calves and steers. Pete, Theo and Charlie Knigge own and operate the business, which started in 1973. Knigge Farms was the first U.S. farm to install robotic milking technology more than 16 years ago.

“It was a fun day!” added Pete’s son Charlie Knigge, also a co-owner of Knigge Farms LLC. “Our farm showed the cast and the crew what modern dairy farming looks like. I’m excited for a national television audience to see it as well.”

The popular reality television show The Bachelor selected Knigge Farms to tape an episode of the show, which started its 21st season on January 2. Knigge Farms will be featured as part of a ‘group date’ on the fourth episode, which is scheduled to air on January 23.

During the taping, the bachelorettes milked a cow, fed calves, cleaned a barn and as the final activity, competed by chasing a wheel of LaClare Farms cheese down a hill.

The cast ended the day at the Paine Art Center in Oshkosh for a rose ceremony. By receiving a rose from the bachelor, the bachelorettes are eliminated or remain to compete the following week.

“It was a bit of a circus around here; however, the opportunity sounded too good to pass up. Too few people have a strong connection to where their food comes from,” said Charlie. “We want to clear up some of the mystery around modern dairy and crop farming.”