“The history and future of Farm Bureau in Wisconsin centers on the “farm community”—Farm Bureau’s commitment to the economic strength and social wellbeing of farmers, local businesses and the people who live and work in Wisconsin.

From the early interest in Farm Bureau supply pools and county Farm Bureau choruses to current attention to legislative representation and county annual meetings, the Wisconsin Farm Bureau Federation has built a tradition of responding to the needs of farmers and consumers.”

That excerpt was taken from former WFBF President Dan Poulson’s Introduction of the “Seventy-Five Years of Farm Bureau in Wisconsin” book printed in honor of WFBF’s 75th anniversary.

As WFBF hits another milestone much of the organization’s history stays the same, but additional memories and achievements have been added.

By early 1920, interest in Farm Bureau existed in Rock, Waukesha, Fond du Lac, Jefferson, Ozaukee, Walworth, Crawford, Dodge and Dane counties. Sensing the time had come for a state organization, leaders in these counties called for a state organizational meeting in Waukesha on May 27, 1920. Before adjournment, the county leaders decided to affiliate with the American Farm Bureau Federation. Wisconsin was the 32nd state Farm Bureau to join AFBF.

A slate of temporary officers was selected, and instructions were given to prepare the constitution and by-laws for adoption. George W. Hull from Whitewater was elected as the temporary chairperson and was largely responsible for much of the early organizational work. Four other officers were selected, and an executive committee of six people was also formed.

Early in 1921, the constitution and by-laws were ready for delegate approval. A meeting was held on Jan. 10, 1921, where permanent officers were selected. Hull was named the organization’s first president.

Membership a Foundation
Between the 15 counties, membership was about 2,000 families with dues at $2.50.

In 1921, George McKerrow of Pewaukee was selected as president. He ambitiously sought a state membership
of 8,000 in the first year. Wisconsin farmers could not provide the base needed to deliver all the services members were demanding. AFBF helped establish a mail membership campaign. The extensive mail campaign helped to generate interest, but membership didn’t reach 8,000 for a number of years.

People
People have always been a significant part of WFBF’s legacy hence the pride in being a membership organization. 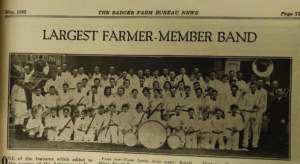 Membership has grown from 500 in 1920 to more than 46,000 in 2018. Committees on the local level and state level give power to members to make the decisions that guide the organization.

Since member leaders have such a critical role in the organization, opportunities to develop skills through programming has been fine-tuned.

Additionally, there were county Farm Bureau bands and choruses, and the predecessor of the Discussion Meet – the county and state talk meets.

Programming has adapted because of the different demands of the agricultural community and Farm Bureau. Now, we have the Young Farmer and Agriculturist, Promotion and Education and WFBF Leadership Institute programs that excel at building leaders.

Policy
Farm Bureau prides itself on being a grassroots organization. Each year, county voting members set the policy that guides WFBF on local, state and national affairs.

From the earliest days of WFBF, the organization realized that achieving success in the legislative arena required working with both political parties to pass favorable legislation on to Wisconsin farmers.

From the first legislative committees established in 1920 to the Policy Development Committee of current day, the issues impacting farmers will always be taken seriously.

Look for more history summaries in the upcoming issues of Rural Route. Excerpts from “Seventy-Five Years of Farm Bureau in Wisconsin”
were used for this article.

*This article was originally published in the December 2018|January 2019 issue of Rural Route.