Celebrating 100 years of farming, the Pauli family farm was recognized as a Century Farm during the Wisconsin State Fair. 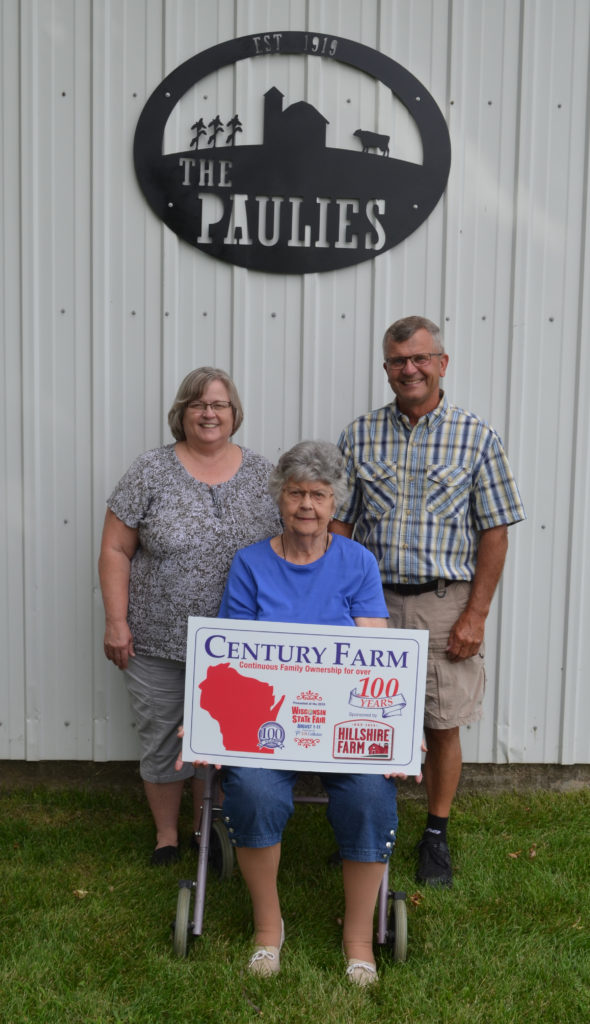 100 years ago, Christ and Mary Pauli bought a farm on Highway PB in between Belleville and Paoli. Little did they know that the farm would stay in the Pauli family for the next 100 years.

On August 6, more than 650 people celebrated the 100- or 150-year histories of their Wisconsin farms during the Century and Sesquicentennial Farm Awards breakfast at the Wisconsin State Fair.

“These days, it’s very unusual for any business, including banks, stores, factories, or anything, to reach 100- or 150-years in business,” said John Yingling, chair of Wisconsin State Fair Park’s board. “To reach this milestone you had to demonstrate a passion to the next generation that made them so intent on keeping it going.”

And that’s exactly what the Pauli family did—they instilled a passion for farming, family, friends, neighbors and traditions.

In 2007, they decided to sell the cows, and continue to grow row crops, sweet corn, pumpkins and other produce to sell at their roadside stand.

“Then about 10 years ago, we started talking about this farm being in the Pauli name for 100 years,” said Bill. “We wanted to do something to celebrate with family and friends.”

To celebrate their farming heritage, traditions and their Century Farm, the Pauli family invited family, friends, and neighbors for an afternoon of music by the Zweifel Brothers Band and good food catered by the Paoli Bread and Brat Haus. The day was filled with reminiscing and a deep sense of pride in the family’s history, complete with a detailed photo display.

More than 300 people attended the celebration including Bill’s mom Marie; the couple’s kids and their families, Katie and Scott Mosher, Tom and Amanda Pauli, and Janelle Pauli, who lives in Austin, Texas; and Bill’s sister and brothers and their families, Gayle and Ken Bauman, Larry and Jan, and David and Trina.

Two other Pauli family members who grew up on the farm include Don’s sisters Faye Whitaker, who lives in Verona, and Mary Eves, who lives in Watsonville, California.

Some of Bill’s earliest memories on the farm include driving tractor, baling hay and cultivating corn.

“Back then, we all drove a tractor a lot younger than we probably should have,” laughed Bill.

He also recalls that the milk was delivered in cans to the Central Cheese Factory, a couple of miles down the road on the corner of PB and Highway A.

“John Stadelman was the cheesemaker,” added Bill. “In turn, our family would get whey to feed to the pigs.”

The Pauli farm and family has always played an active role in the Belleville and farming communities.

After Bill and LuAnn sold the cows, she started working for General Beverage in Fitchburg and he saw an ad that the School District of Belleville was hiring bus drivers. He decided to apply.

“I enjoy spending time with the students and especially driving bus to and from the sporting events,” said Bill “It helps me stay involved with Belleville families and sometimes it gives me a new perspective.”

During the spring basketball awards banquet, several of the basketball players presented Bill and LuAnn with a farm sign that they designed and made in Ed Neumann’s tech ed class commemorating the family’s Century Farm.

The couple encourages others who are thinking about applying for the century farm recognition to do so.

“You just need to fill out the application and provide proof of continuous family ownership of the property,” explained Bill. “It’s a great recognition for past and future generations.”

The Century Farm and Home Program started in 1948 in conjunction with Wisconsin’s Centennial Celebration. This year, 145 properties joined the 9,468 Century Farms already honored since 1948. = Since we are statewide, can we just include the list of all the farms recognized this year? I’m sure that there are many who are Farm Bureau members and I don’t want to exclude them.

Congratulations to the Pauli family and all the Farm Bureau members who received this historic recognition!

Tune: 100 Bottles of Beer on the Wall

One hundred years of life on the farm

One hundred years of fun

Milk the cows, make some hay,

Work till the chores are done!

It all stated, back in the day

And started the Pauli homestead!

A generation after that

Don married Marie, and moved on the farm

And worked till the chores were done.

Don and Marie farmed the land

They had 4 kids to help them out

Bill married LuAnn, and moved on the farm

And then along came Kate.

Pumpkins and corn he sold

Tom and Janelle came along too

This is the story they told.

One hundred years of life on the farm

One hundred years of fun

Milk the cows, plant some crops,

Work till the chores are done!