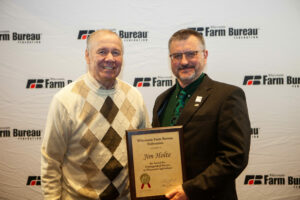 “In all of his roles Jim worked tirelessly to make agriculture a top priority for the state of Wisconsin,” said nominator and WFBF Vice President Dave Daniels.

Jim started his farming career as a dairy farmer before eventually transitioning to a beef and grain farmer.

In 1995, he was elected to the Wisconsin Farm Bureau Board to represent District 9, which includes the counties of Barron, Dunn, Chippewa, Pierce, Polk Burnett, Rusk, St. Croix, Sawyer and Superior Shores. In 2012, he was elected president of WFBF and Rural Mutual Insurance and continued in that position for seven years.

During his tenure, Jim represented agriculture in numerous ways. For example, he hosted U.S. Department of Agriculture Secretary Sonny Perdue on his family’s farm, provided testimony to the U.S. Senate Environment and Public Works Committee on modernizing the Endangered Species Act in Washington, D.C., and appeared dozens of times on RFD-TV and other media outlets.

Jim also was a member of Wisconsin Rural Leadership and served on the board to keep the program a mainstay to develop leaders for rural Wisconsin.

As a graduate of UW-River Falls, Jim was named Wisconsin Distinguished Agriculturist by the College of Agriculture, Food and Environmental Sciences in 2015.

Jim and his wife Gayle live in the Elk Mound area. They enjoy spending time with their two grown daughters and their families.