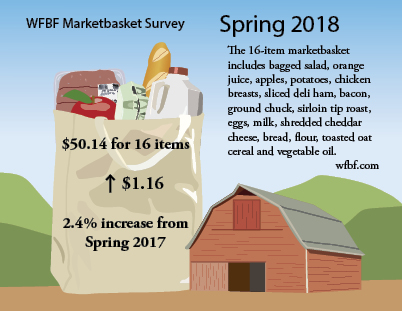 Shoppers are seeing stable food prices at the grocery store according to the latest Wisconsin Farm Bureau Marketbasket Survey of 16 basic food items used to prepare one or more meals. It showed that the average cost of these items was $50.14. The average cost is $0.48 (or nearly one percent) higher than the same survey conducted last fall and $1.16 (or 2.4 percent) higher than a year ago.

The survey items that saw the greatest price increases since last year were: one dozen, large, Grade A eggs; boneless chicken breast, ground chuck and Cheerios.

“The item that saw that largest price increase was eggs,” said Sarah Marketon Wisconsin Farm Bureau’s Director of Communications. “We are most likely seeing this increase due to an outbreak of avian influenza in South Korea, which has contributed to more American eggs being exported. As demand increases the price does as well.”

Overall, prices were stable compared to a year ago, with six of the survey’s 16 items being lower in price.

An over-supply of milk continues to have a dampening effect on the price Wisconsin dairy farmers receive for their milk. The reduced price continues to be passed on to shoppers. The price of a gallon of whole milk dropped 8.9 percent (from $3.25 to $2.96) from last year’s survey.

FARMER’S SHARE IS JUST $8.02
During the last three decades, retail grocery prices have gradually increased while the share of the average dollar spent on food that farm families receive has dropped. In the mid-1970s, farmers received about 33 percent of consumer retail food expenditures in grocery stores and restaurants. Since then that number has decreased steadily and is now about 16 percent, according to the U.S. Department of Agriculture. Using that percentage across the board, the farmer’s share of this quarter’s $50.14 grocery bill is $8.02.

The USDA says Americans will still spend approximately 10 percent of their disposable annual income on food, the lowest average in the world.