Tim and Danielle Clark of Beaver Dam have been appointed by the American Farm Bureau Federation to its Young Farmers & Ranchers Committee for the 2015-2017 term beginning in March.

The national committee is comprised of 16 positions representing all regions of the U.S. An individual or a couple may hold each committee position. 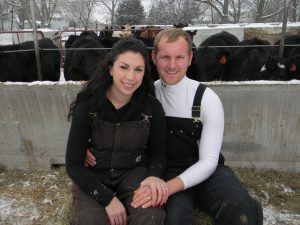 “We are honored to represent young farmers and agriculturists on this national committee,” Tim Clark said. “We are excited to work with other farmers to grow the next generation of leaders in American agriculture.”

“We look forward to the leadership experience we look to gain and bring back to our local and state Farm Bureau,” Danielle Clark added.

Tim Clark recently completed a three-year term on the Wisconsin Farm Bureau’s Young Farmer and Agriculturist Committee. He served as chairman in 2014.

Tim Clark is a district sales manager for Dairyland Seed, covering Adams, Dane, Columbia, Juneau, Richland and Sauk counties. He and Danielle (formerly Hammer) married this past summer and own a herd of more than 40 beef cattle in Beaver Dam. Both are fifth generation farmers. Danielle Clark is a clean fuels and vehicle technologies coordinator for the American Lung Association in Wisconsin.

“Farm Bureau’s YF&R Committee members play a vital role in advocating for agriculture while further building their leadership abilities,” AFBF President Bob Stallman said. “The commitment and quality of the young agriculturalists who volunteer to serve are always impressive, and this year is no different. It’s clear that the future of farming and ranching is in good hands.”

National committee members are nominated by their respective state Farm Bureaus. They study farm and food policy issues, participate in leadership training exercises and hone other professional skills during their tenure as committee members.

The Young Farmers & Ranchers program includes men and women between the ages of 18-35. Learn more online at http://www.fb.org/index.php?action=programs.yfr.home.

Rick Roden of the Ozaukee County Farm Bureau was the last Wisconsin YFA member to serve on the national committee in 2012-13.