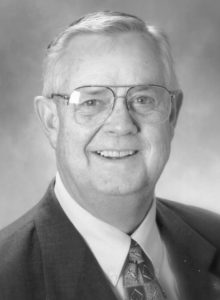 “Dan was a strong leader who left a lasting legacy on Farm Bureau and I am deeply saddened to hear of his passing. Personally, Dan was a mentor of mine within Farm Bureau and someone I had great respect for. I know I’m not alone in that sentiment because many people looked up to Dan.

Dan served more than 30 years on the WFBF Board and spent 11 years as president before retiring in 2003.

Dan was tremendous advocate for agriculture. As a farmer and graduate of UW-Madison’s Farm & Industry Short Course, Dan knew firsthand the state and federal issues impacting the farmers and made it his goal to make things better for them.

He loved farming but loved his family even more. When we talk about the Farm Bureau family, that feeling of camaraderie and loyalty was embedded even more with Dan’s leadership. He was a leader in every aspect of his life and we will forever be grateful that he dedicated so much of it to Farm Bureau.

Wisconsin Farm Bureau sends its deepest condolences to the Poulson family. Dan was an exceptional person and a powerful leader who will never be forgotten.”

A full obituary can be found here: www.gibsonfuneral.com/obituary/HowardDan-Poulson.