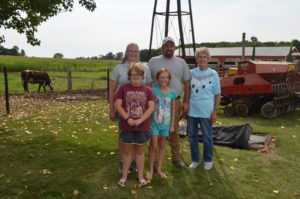 Chris and Brenda Conley own and operate High-Gem Holsteins and Normandes in Neosho.

In 1927, Chris’ great grandparents started the farm. They decided to settle in the southern portion of Dodge County because the rolling hills reminded them of Switzerland.

Chris knew from early on that he wanted to be a farmer and is determined to afford their daughters the same opportunity.

Chris has built and retrofitted much of the equipment he uses on the farm by watching a lot of YouTube videos. He shopped around for planters until he decided to rebuild his existing planter to suit his needs.

Building and retro-fitting equipment has offered cost-savings for the Conleys. Chris sold the conventional tillage equipment and is proud to share that all his field work is done with one 100-horsepower tractor.

“I figured that if this is what we are going to do, I don’t need this [tillage] equipment and I can’t go back because it’s not here to use,” said Chris Conley.

“We call him Mr. Innovation,” said Tony Pierick, president of Dodge County Farmers for Healthy Soil and Healthy Water  group. Chris is a charter member of the watershed group and is always enthusiastically sharing his ideas, successes and lessons learned with the group.

In 2016, Chris started experimenting with no-till. During the first year, he started  with only a small percentage of his acres but the next year, he transitioned 100 percent of their farm to no-till.

“If you don’t have any sleepless nights, you aren’t doing enough,” shared Chris on getting started with no-till and cover crops.

“The good things take care of the bad things,” said Chris. “Good bacteria are attached to the living rye root, and the corn benefits from it. He also sees carbon sequestration benefits in keeping the ground covered.” 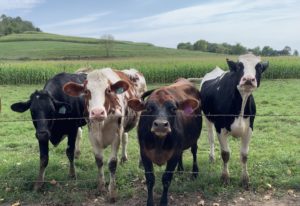 “Conservation efforts benefit yourself today and benefits future generations tomorrow,” said Chris. “Tending to the land shows how much you care about what you are doing.”

Chris is using less inputs to get the same quality. He is working to improve  soil health.

Introducing conservation efforts has reignited Chris’ passion and motivation for improvement. He is always trying new ideas and experimenting with different practices. Chris finds himself closely examining his soil for good bugs and birds as a sign of healthy land.

Planting green and no-till efforts are well suited for hilly regions. There are no wash outs during large rain events.

In addition to the cost-saving sustainability of building and maintaining their own equipment and conservation efforts to improve soil health, the herd of Normande and Holstein cattle fits in with the Conleys’ sustainability goals.

Normande cattle originated in the hilly regions of France. They are well suited for grazing. They also have a high feed to milk conversion rate. The cattle are grazed from April to November. Normande cattle are a dual-purpose breed and support the Conleys’ long-term plan of transitioning the herd to beef.

“We have lots of hills here and we do a lot of pasturing and grazing. They work really well in our system,” said Brenda.

The cattle, land and equipment work together to achieve sustainability goals. The Conleys hope to pass the farm on to their daughters someday. They have laid the groundwork for healthy soil and water for generations to come. 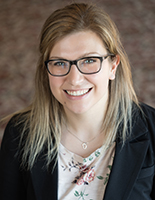 Rachel Gerbitz is WFBF’s Director of Sustainability Communications and Partnerships. In this newly-created role, she oversees the organization’s sustainability communication efforts. Rachel grew up in Rock County where she was involved in 4-H and the Wisconsin Junior Holstein Association. She now lives in Kaukauna. In her spare time, Rachel manages her small herd of registered Jersey cattle.