After hearing from many throughout the country about schools only being able to provide skim milk and skim flavored milk in school lunch programs and the lack of student consumption of these milk choices, USDA has acted. This summer Sonny Perdue, U.S. Secretary of Agriculture, announced that schools could apply for a waiver and provide 1% flavored milk in their school nutrition programs.

This sounded like great news until I actually looked into what it would take to get a variance. The form required a district to document loss of milk consumption compared with previous years or 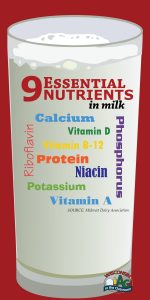 Our school district decided to conduct a Student Food Waste Audit, you can actually go to the EPA website for guidance on setting up this study. This was a rather involved process. When I first proposed the idea of applying for the wavier, the food services director and I estimated there was 20% milk refusal. To carry out the audit and test our hypothesis, all the un-opened and unfinished skim milk was collected and weighed over several days. Students were also asked why they did not drink their milk with many stating they did not like the taste of skim milk.

You may be wondering why students always take milk even though they do not like the taste. Being a school board member, I remember a meeting where it was indicated that all students must have a milk carton on their tray. If the school were to be audited and this wasn’t happening, the school would get a reduction in school nutrition funding. Wow, shouldn’t we be more concerned about whether students are drinking the nutritious milk that schools provide rather than just pushing it out and having it end up in the trash? This is why our schools end up with garbage pails filled with unopened milk cartons.

The Great News
In late November 2017, our school received the news that we were issued a variance. I was so excited! Our nutrition director contacted our milk vender to get 1% flavored milk. The response however, was maddening. Our school was told they could not get 1% flavored milk because none of the suppliers were set up to do so as a result of the previous regulations prohibiting 1% flavored milk in schools.

On November 29, 2017 USDA issued an interim ruling for the 2018/19 school year allowing schools to provide 1% flavored milk for breakfast and lunch and in milk vending machines. I keep hearing that fluid milk consumption in the U.S. is on a steady decline with young people drinking less milk. Is it any surprise why this is happening, when our students are only provided milk that one student described as, “gross watered-down milk”?

What can You Do?
Here are some ways you can get 1% flavored milk back into the hands of growing kids:

The Time is Now!
Please do not wait to take action as many schools will be considering their school milk and bread contracts in the next few weeks. Our school district received notice on January 18 that our milk bids would be coming due the next few weeks. If we do not act quickly this opportunity to make a positive difference for our students could be lost.

When flavored milk in schools was substituted with plain milk a 35% reduction in milk consumption resulted, 7-8% of fluid milk in the U.S. is consumed through school lunch programs. Let’s be a leader in the effort to get milk consumption back up in our schools. After all, we are America’s Dairyland!

If not us then who?

Joe Bragger was elected to the Wisconsin Farm Bureau Board of Directors in 2011. He represents District 4 which consists of Buffalo, Trempealeau, Lacrosse, Jackson, Monroe and Eau Claire Counties.  Joe farms with his wife Noel, brother Dan Bragger along with a dedicated team of employees.