Football fans across America unite on one night for the greatest game of them all, the Super Bowl.

Whether they are watching the game, the commercials or the halftime show, millions of Americans gather with their families to partake in the game every year. Wood County Farm Bureau members, Alan and Stephanie Hughes, are no different. This year, the food was prepared, chores were done early and the entire family gathered around the TV as the game time inched closer.

The family owns Sunsett Dairy, a 55-cow dairy farm near Pittsville. Like many Americans, their lives were completely disrupted by the pandemic.

“Throughout the pandemic, the land and cattle still needed to be taken care of,” Stephanie said. “Any of us farming still had to do what we do; agriculture doesn’t stop.”

In addition to farming, Alan is in his second enlistment as an F-16 Crew Chief for the Wisconsin Air National Guard. In 2019, Alan was deployed to the Bagram Airforce Base in Bagram, Afghanistan, as part of the 115th Fighter Wing. After returning home in late 2019, he said he was looking forward to returning to the farm.

“I was always looking for a little break from the day-to-day work on the farm. My break just happens to be getting to work on F-16 fighter jets,” Alan said. “While I was in Afghanistan, all of the harvest work fell on Steph’s shoulders. That is a lot of work for one person, so I was looking forward to being back home to help with planting.”

Coronavirus had different plans. In April, as the virus made its way to the Midwest, Alan was called to assist with testing processes. He received a temporary certified nursing assistant certification to assist in the field hospital at the Wisconsin State Fair Park, if needed, but was ultimately transferred to a call center to report test results back to patients.

“There were days when people were making up to 600 calls each,” Alan recalled.

Back at home, Stephanie worked to balance the day-to-day work of the farm, spring planting season and caring for their three children, Bryce, 10; Gavin, 9; and Derek, 4. Once homeschooling became an inevitable reality, schedules were adjusted to make the balance more manageable.

“I would get up and out for chores by 3 a.m. so I could make it in by 6:30 a.m. to start schoolwork with our oldest two before our youngest woke up,” Stephanie said. “It was during this time that made me really feel lucky to have this occupation to be here with the kids and give them the space to be free to roam.”

Throughout spring and summer, the family kept the farm going with plenty of extra family time together. Stephanie said she grew to appreciate quality time with the children.

“The pandemic forced us to slow down, be home and focus on this time together,” Stephanie said. “It gave us that time we needed to focus on the management of our cows and try new things on the farm, which ultimately reflected in the cows’ production, as well.” 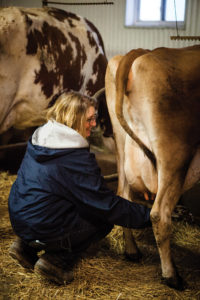 On Dec. 14, Alan was contacted by his cousin, Gareth Hughes, who is a seven-time Emmy winner and creative director at CBS Sports. He informed them of a project he was working on for the Super Bowl and wanted the family to participate.

“He told us the storyline was a tribute and celebration of the people who are essential that kept life going through the pandemic. When his team sat down to discuss what careers they wanted to include in the piece, Gareth was the one who suggested farming,” Alan said.

“Gareth knows agriculture is important and knew we didn’t stop during the pandemic,” Stephanie said. “When he made the ask, it was a no-brainer for us.”

The piece features 12 groups from across the country with different occupations essential to the pandemic. Set to Miley Cyrus’ rendition of David Bowe’s “Heroes,” the completed piece featured occupations from nurses to mail carriers to grocers.

“To be put in a [segment] with nurses, bus drivers, paramedics – it’s unfathomable being put on that same pedestal. It is an honor to be thought of, not because we feel that we ourselves are heroes, but we are humbled to represent people that we think are,” Alan said.

The family appreciated the opportunity to share a glimpse of agriculture on a national scale.

“Any opportunity we are given to tell a farmer’s story, we need to do that in this day and age,” Alan said.

Keeping agriculture in the public’s mind also is why the Hughes family chooses to be Farm Bureau members.

“Farm Bureau is an outstanding way to provide agriculture programs and activities to people in our own local communities,” Stephanie said. “There are also many opportunities for members to speak to our government representatives on behalf of farmers.”

Members of the filmmaking crew included: Gareth Hughes (creative director), Laura Dunham (producer), Sean Brennan (director of photography) and Josh Glaser (editor). The crew spent Dec. 28 and 29 with the Hughes family gathering a variety of footage to be used for the segment. Once filming was complete, the anticipation of the reveal began.

“We didn’t see the piece until it aired on television,” Alan said. “Gareth texted me moments before it aired, saying, ‘It’s one of the best pieces I’ve ever done. We are really proud of it; it is a big deal’.”

As the family settled in to watch, Stephanie said they were moved by the end result.

“I started crying, everything about it was emotional – the piece itself, our family connection behind it, what it all represented,” Stephanie said. “It really is beautiful.”

Reflecting on their experience throughout the pandemic and developing the Super Bowl segment, the family said they feel exceptionally fortunate.

“After this past year, I cannot imagine any other way to raise a family [than on a farm],” Alan said. “We missed out on a lot of things this year, but we gained a lot of things, too.”

Stephanie agreed and said this year is one that taught them to appreciate more than ever before.

“We are extremely fortunate to be farmers,” Stephanie said. “This lifestyle is one we will not take for granted.”