Service is Everything to the Strueders

Racine County Farm Bureau members Bernie and Jacquie Strueder are busy people. Both in their mid-70s, there is no slowing down for these two. No matter the day, they are always working in agriculture and striving to serve.

“The Same Day Kennedy Was Shot”

This year Bernie celebrated 51 years of service at Harry Hansen’s Meat Service located in Raymond. What started as a favor and a part-time gig in 1964, turned into a life-long career in the meat and customer service industry.

Bernie remembers the day he was asked if he would run the truck and pick up pigs as a favor for a friend.

“I remember that day because it was the same day Kennedy was shot,” Bernie said.

Afterwards Bernie was asked if he wanted to help out once in a while and his time spent working at Hansen’s increased. Years later, he doesn’t have a business card big enough to fill it with all the job titles he holds.

“Slaughter, maintenance, cutting… whatever needs to be done I do,” Bernie said.

When Hansen’s employee Rick Kastenson bought the business in 2009 he asked Bernie to return for help and guidance. He obliged.

Bernie describes Harry, the original owner, as “the best guy to work for” but promises that Rick and his family hold the same standard as Harry did.

“We have three generations of farmers and customers coming here,” Bernie said. “That tells you how we do business. They come from all over to our store. It’s a pleasure to talk to the people. We greet them when they come in and our employees take their order out to them.”

Bernie says they try to work with farmers’ erratic schedules and also come in early in the morning to accommodate customers.

The whole family has been a part of the workforce at Hansen’s over the years including their four children, Brenda, Ann, Paul (deceased) and Jodie, who still works on the kill floor.

“It’s Funny How Easy It Is To Relate To Customers”
Jacquie doesn’t know if the nickname the “older lady” is a good thing or a bad thing with her customers at West View Gardens, a greenhouse located in Caledonia. Regardless, they ask for the “older lady” because they know that she will do the best she can to help them.

“It’s funny how easy it is to relate to customers,” Jacquie said with a smile.

As if they don’t have enough on their calendar, the Strueders also spend many Saturdays at the Brookfield Farmers’ Market where they sell apples for Brightonwoods Orchards. They have been doing this for about 18 years.

Along with some help from grandchildren on occasion, they sort and sell apples. They pick up 15 to 20 bushels from the orchard on Friday evenings and then make it to the market by 6:30 a.m. on Saturdays. They set up the apples at eye level and provide samples to give the customers the best experience possible.

“It’s a different clientele (at the farmers’ market). They buy enough for the week,” Jacquie explained. “They come for more than apples, they come for the experience.”

Their grandchildren seem to be following in their footsteps when it comes to customer service.

“It’s so neat to watch them interact with the customers,” Jacquie said. “It’s fun to have them along with us.”

Bernie said it’s good to have more hands for helping when you are ‘running around in the small area’. While smirking at Jacquie he added, “Plus, sometimes she gets distracted.” 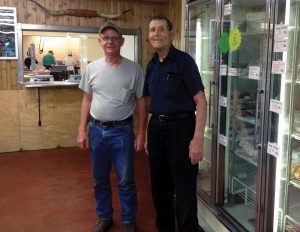 “If They Experience It, They Might Just Go For It”
The Scott and Hansen families got Strueders involved in Farm Bureau in the late 1970s.

Bernie says he enjoys Farm Bureau because of the way they support agriculture and the programs they have in place to advance it.

“(The) Ag in the Classroom (Program) helps get kids involved. They have to know where their food is coming from. It is such a great program.”

Bernie served on the Racine County Farm Bureau board for a few terms. Jacquie is active with the county’s women’s committee and serves on the board. She also helps with the cream puff stand at the county fair.

“The leadership here on our county board is just great,” Bernie said. “I like the way Farm Bureau supports the younger generation.”

Jacquie agreed, “We need this younger generation to take over, that’s why our county supports young ladies to attend the Wisconsin Ag Women’s Summit each year.”

“We are in desperate need of young people to go into agriculture,” Bernie added. “If they experience it, they might just go for it. Even if they can work for someone-if they can get the experience they will have that forever.
They have to like the work and have to stick with it.”

It is clear that Bernie and Jacquie enjoy the work they are doing. When asked if they plan to slow down any time soon they said as long as they are able to move they plan to work and serve. However, the Strueders, who have
been married for 53 years, are planning a trip to Hawaii in the coming year.

Story by Amy Eckelberg. Original version appeared in the August|September 2015 issue of .