Biddick, Inc.: On the Growing Side of Rural Route 1 Popcorn

As of September 2021, Statista, a leading provider of market and consumer data, reported that 232.34 million Americans consumed popcorn products in 2018, with it projected to increase to 235.66 million in 2020. By volume, popcorn is America’s most favorite snack food.

Whether you buy it by the family tub, bag, tin or box, microwave or popping corn, with Rural Route 1, you’re guaranteed, ‘The perfect pop, a healthy snack and its gluten free.’

“The USDA had a Payment-In-Kind (PIK) program where farmers could choose to take farmland out of production for one year and receive a payment,” explained Dakotah Hammerly, crop production supervisor for Biddick, Inc. “At the time, owners Roger and Brad Biddick saw a decrease in demand for seed corn so they decided to experiment with popcorn on land that they owned. Eventually, they had enough popcorn production to create Rural Route 1. Currently, we grow anywhere from 80 to 500 acres of popcorn, depending on our crop rotation and what Rural Route 1’s needs are for the year.”

Dakotah earned a bachelor’s degree in agriculture education from UW-Platteville. While attending college, he had an internship at Biddick, Inc. After graduation, he was hired full-time and loves being referred to as a ‘popcorn farmer.’

“Growing popcorn is very exciting. Every time I tell people we grow popcorn their eyes light up!” said Dakotah. “It’s a unique crop in southern Wisconsin and not many people are familiar with it, so it’s fun to share our story on how it’s produced.”

“It just makes sense,” added Dakotah as he explained that the company uses the same processing equipment for popcorn as it does for seed corn and that the typical growing season for popcorn is very comparable to commercial seed corn.

The popcorn is planted anywhere from late April to early May.

“We usually try to plant our popcorn before we plant seed corn because popcorn takes longer to mature compared with our seed corn varieties. The average maturity for popcorn is around 100 to 105 days relative maturity,” said Dakotah and added that growing popcorn is a lot of trial and error. “We focus on quality and details by selecting hybrids that have better taste and tenderness versus selecting hybrids that are based on yield alone.”

Dakotah also added that staff implement no-till and strip-till for about 50% of the acres cropped and the other 50% is vertical-tilled.

“We also incorporate rye, barley and winter wheat into the farm’s cover cropping system. Cover crops are interseeded in the fall and terminated in the spring,” said Dakotah. “Biddick does this to help with soil conservation, increase nutrient holding capacity for plant growth and added weed control.”

Dakotah shared that one of Biddick’s biggest challenges is harvest time.

“Since popcorn takes longer to mature, we harvest it after seed corn harvest is done,” explained Dakotah “We harvest popcorn at high moisture, around 25 to 30%. If the ear dries too much in the field, we risk damaging the kernels during harvest. If harvest goes too late into the fall, popcorn can get frost damage. If popcorn kernels are exposed to frost it can cause cracks in the seed coat and ruin its ability to pop.”

He explained that Biddick, Inc., is unique in the popcorn industry because it harvests popcorn the same way it harvests seed corn.

“We use Oxbo pickers to harvest popcorn on the ear,” said Dakotah. “This is a gentler process that helps preserve the kernels. The popcorn is picked on the ear and brought into our husking building where every ear is hand sorted for quality,” said Hammerly. “It is then transported by belts into our bulk dryers where we dry the ears to a pre-determined moisture.”

He explained that once the ears are dried, the ears go through a shelling machine and into a bin. In the processing building, workers clean up the popcorn to take out any unwanted pieces including husks, pieces of cob or corn stalks, and then the popcorn kernels are put into a 2,000-pound tote bag.

After this process, the raw popcorn is stored in a warehouse until staff at Rural Route 1 are ready for it. Once it ships to Rural Route 1, the staff completes the final steps for retail popcorn and it’s on its way to the consumer.

Dakotah explained that another challenge for Biddick is leasing new production ground or trying to secure multi-year contracts as the company continues to grow and expand production.

“There is risk involved with locking in a three- or four-year lease without knowing what the future input costs are or commodity prices,” added Dakotah who said that farmers need to be willing to try new things and be able and willing to adapt.

“Weather has an impact on almost everything we do here–trying to plan for the day can change every hour so being flexible to change can really help set you apart from other farms and businesses,” said Dakotah. “It’s also easy to get stuck in a rut and stick with what you know. I’ve learned it’s better to try something new, fail and learn from it than not to try anything at all.”

Dakotah said that he enjoys working for Biddick, Inc., because of the changing seasons and that there is always something to get ready for and look forward to.

“I’m the type of person who likes doing different things and working in agriculture gives me that opportunity to experience something new every day.”

While in college, Dakotah was a member of the UW-Platteville Collegiate Farm Bureau and in the fall of 2018, he was elected Young Farmer and Agriculturist chair for Iowa County Farm Bureau.

“Unfortunately, COVID intervened and I haven’t had a chance to coordinate many YFA activities,” added Dakotah.

“We also offer an internship for students who want to learn more about production agriculture,” explained Dakotah who said that he is most proud of going from an intern to the crop production supervisor position. “A few years ago I was interviewed to be an intern at a company I had never heard of and now I’m the one doing the interviews.”

Dakotah said that his outlook for future careers in agriculture includes a lot more technology and data management.

“We have data for every part of our production, from tablets in the planters to iPads while we scout during the summer and harvest monitors in the combines,” said Dakotah. “I think the future will rely more on managing data and making input decisions based on real-time information from the field. Data and technology will help us make better decisions.”

“I appreciate the opportunity that Biddick has provided,” said Dakotah who along with his wife Lara, agricultural teacher and FFA advisor at Iowa-Grant High School look forward to raising their son Trevis on the backroads of Livingston, growing popcorn and appreciating America’s favorite snack food. 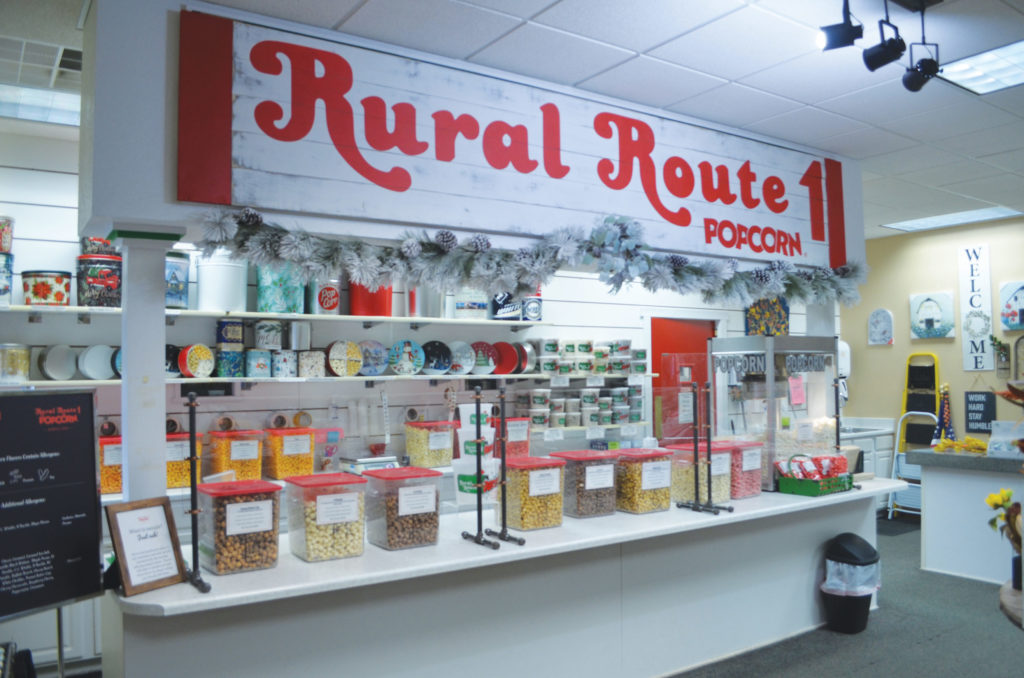 If you are driving in southwest Wisconsin, take a necessary detour and visit Rural Route 1 Popcorn on Highway 18 in Montfort. Free sampling of more than a dozen or so unique popcorn flavors is a must.

The most popular specialty is Ivory Almond K’Nuckle, a mix of popcorn, almonds and white fudge. The success of this recipe has led to three other fudge-covered delicacies, C.C. Winkle, R.C. Snakle and the latest, S.S Dunkle.

Story and photos by Marian Viney. Originally appeared in the February|March 2022 Rural Route. This year, the Wisconsin Ag in the Classroom Book of the year is “Popcorn Country: The Story of America’s Favorite Snack.” The Ag in the Classroom essay contest topic for fourth- and fifth-grade students is, ‘What’s popping in Wisconsin? The value of corn to our economy!’ Learn more about educational popcorn resources on page 40 of the February|March 2022 Rural Route.