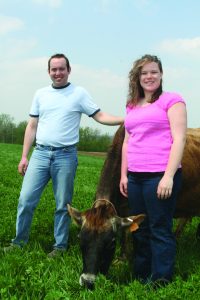 Youthful, optimistic and ambitious: Derek and Charisse Orth could be the poster couple for the Wisconsin dairy industry’s future.

Among the newlyweds’ goals is to build a premier herd of Jersey cows on their family’s farm in the scenic hills of Grant County.

“We try to focus on the cows,” said Derek, who farms with his parents, Randy and Laura Orth, on the farm they bought between Fennimore and Lancaster in 1993.

The family was milking 60 cows when Derek graduated from Fennimore High School in 2004. Looking for something different in the way of climate and topography, Derek spent the next year in Logan, Utah where he worked with a 90-cow Jersey herd and obtained a certificate in dairy herdsmanship from Utah State University. The experience confirmed what he wanted to do with his life.

Derek came back to the farm in 2005; the Orths purchased more Jerseys and built a swing-12 parlor in 2008. Today they milk 250 cows and farm nearly 400 acres of corn and alfalfa.

A passion for agriculture was also passed on to Derek’s three sisters. Susan is a Farm Bureau member who works for World Dairy Expo in Madison. Dana is a recent Kansas State University graduate who is considering agricultural work with the Peace Corps. Julie is wrapping up her year as a state FFA officer. 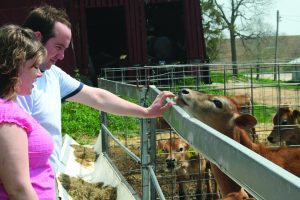 e cow families bred at Orthridge Jerseys are a big part of the Orths’ long-term success. Each of the hundreds of cows and their offspring are given a name, which requires some creativity.

‘Demo-P’ is a name that will have historical significance for the farm. It’s the name of their first bull whose semen will now be sold to other cattle breeders by Genex.

“It was a great feeling to see his name and genomic data in the Genex catalog,” Derek said. “I remember breeding that cow, and now that bull calf’s semen will be sold worldwide to influence other herds. It’s an unreal feeling.”

With an ability to explain genomics in easily understandable terms it’s clear that the reproductive side of dairy farming is something he clearly enjoys. In the last year he’s worked with four different artificial insemination companies on selecting the right matings and selling his best bull calves between nine months and one year old.

With the use of sexed semen the herd has produced 200 heifer calves last year. While it has created some growing pains, mainly over where to house all of them, it has also allowed the Orths to improve their herd by culling some of the poor producers earlier than normal.

When the Orths expanded their herd it meant bringing on employees. They communicate with their two full-time and eight part-time employees at team meetings. The only drawback Derek sees to having all of the farm’s employees native to the local area is they all want to attend the same events.

These days his main partner on the farm and off is his wife, Charisse, who he married last October. The couple first met as 4-H members through Derek’s sister Julie. She grew up in the nearby village of Stitzer.

“It’s weird to think I didn’t do anything with cattle just seven years ago,” Charisse said.

It was then that she was asked if she wanted to show a dairy calf by another friend with a farm. Today, when not helping at the farm, she’s a junior at UW-Platteville, studying ag business and animal science, with an emphasis in dairy, marketing and communications.

“This is my life now,” she said brimming with an excitement for dairying that she shares with Derek.

Derek on the Record…

Why do you like Jerseys so much?
“If I had to use just one word, I’d say because they are efficient.”

Expand on that…
“They have great overall health, and have both great reproductive and feed efficiency. Their black hooves make for harder and healthier feet, and their milk is high in components.”

What about their temperament?
“They are arrogant and friendly too. Each has their own personality.”

What’s your favorite part of your job?
“I like the reproduction side of dairy farming. Getting to see the entire process from the straw to a baby calf, that is what drives me.”

What would you be doing if you weren’t a farmer?
“I’d probably be a reproductive specialist for an A.I. (cattle breeding) company…or a math teacher.”

You were a member of Farm Bureau’s second Institute class. What did you get from the experience?
“While going through the class we were also going through our expansion on the farm. I think it helped me with time and professional management. Personally, I’ve been more apt to do things like get involved with and host the Grant County Night on the Farm, a social gathering and farm tour for current and potential Farm Bureau members.”

What’s your favorite Farm Bureau event?
“The Wisconsin Farm Bureau’s Annual Meeting. I like the social aspect of seeing other members, the good speakers and the entertainment.”

What are your goals for the farm?
“I’d like to build a transition barn for cows that have recently calved and buy another farm to consolidate our heifer facilities and have more acreage. I’d like to see more of our bulls in the A.I. industry. I’d like to conduct more embryo transfers on our herd, and get more involved in the Jersey breed industry. We want to be recognized as a premier herd.”

What are your personal goals?
“Personally, we’d like to start a family. We’ll be moving shortly to a home we are remodeling in Stitzer. As for Farm Bureau, I’d like to win the YFA Achievement Award at some point.”

What’s the key to your optimism?
“The number one thing is to surround yourself with positive people. Have a good team. On a dairy farm, that includes your banker, veterinarian and nutritionist.”