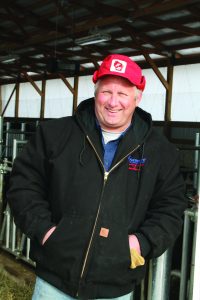 Don Radtke has learned that you never stop learning.

Whether in his professional career working with future farmers or as a board member for the Wisconsin Farm Bureau and Rural Mutual Insurance Company, the Marathon County farmer says, “I keep learning things all the time.”

He is also a firm believer that things happen for a reason, although he doesn’t always know why at the time. He counts his decision to switch professional gears and manage a farm operation in an educational setting as a positive move.

“It’s been a good change,” he said. “Although if you told me 20 years ago what I would be doing today, I would have just laughed at you.”

Don grew up outside of Merrill on a dairy farm that straddled the Marathon-Lincoln county line and eventually farmed with neighbors in a 500-cow partnership. Today, he manages the farm operation at the Northcentral Technical College Agricultural Center of Excellence (Dairyland State Academy). The neat and tidy operation set on 100 acres outside of Wausau officially opened last June.

It exposes students enrolled in agribusiness, dairy science, agronomy and agricultural finance to different management styles (grazing and robotic milking machines) and gives them hands-on experience with a herd of 50 milking cows and technology like the state-of-the-art robotic calf feeder.

“Personally, the biggest change is the technology,” Don admits. “I kind of bucked technology when I was farming on my own, but I look at things differently now.”

“This is the type of equipment they want hands-on experience with,” he said of helping students utilize a computer to see which calf is eating or which cow is being milked by the robotic equipment. “We want them to be exposed to everything that is out there.”

Don credits many in his community, including the college president and Marathon County Board of Supervisors, with having the foresight to revitalize the tech college’s ag program.

“Here in Marathon County, we have the city of Wausau and the rural areas working together for the betterment of both,” he said.

Cooperating for mutual benefit is also what first attracted Don to Farm Bureau in the 1980s. His neighbor, Clarence Utech, signed him up as a member and he quickly became involved in young farmer activities. He served as president of the Marathon County Farm Bureau for a couple terms before being elected to represent District 8 (Clark, Lincoln, Marathon, Portage, Price, Taylor and Wood counties) on the WFBF Board of Directors in 2003.

“There’s a lot more to agriculture than the physical aspect of farming,” Don says is another thing he has come to learn through Farm Bureau.

“I’ve probably learned the most as a director for the Rural Mutual Insurance Company,” he said. “There’s so much more to an insurance company than I realized before. I now have a better understanding of why they do what they do.”

He says he once believed the misconception that if an insurance company is making money then it should automatically lower premiums.

“If the insurance company doesn’t make money then the assets won’t be there to pay for claims,” he said. “Rural Mutual has gotten itself in a better financial situation which allows it to do things they couldn’t have before. As the Rural Mutual Company does well, so does Farm Bureau.”

Just as Rural Mutual was founded by Farm Bureau members who could not get other insurance providers to write policies for them, Don asked how many present-day companies would have defended agriculture’s interests when a Sawyer County cranberry grower was sued with a nuisance lawsuit.

“How might the Right to Farm lawsuit have turned out had Rural not got involved?” he asked.

“What I liked is that Farm Bureau is very family-oriented if you want it to be,” he said.

Speaking of family, his wife of nearly 30 years, Jilayne, is a Merrill native who did not have a farm background as a child.

“Jilayne learned a lot about agriculture from Farm Bureau,” he said.

Jilayne served as the Marathon County Farm Bureau Secretary and on the WFBF Policy Development Committee. She also graduated from the Farm Bureau’s Institute leadership course. The Radtkes have three adult children (Barb, Gena and Matt) and five grandchildren. Don was actively involved in his church for many years as an elder.