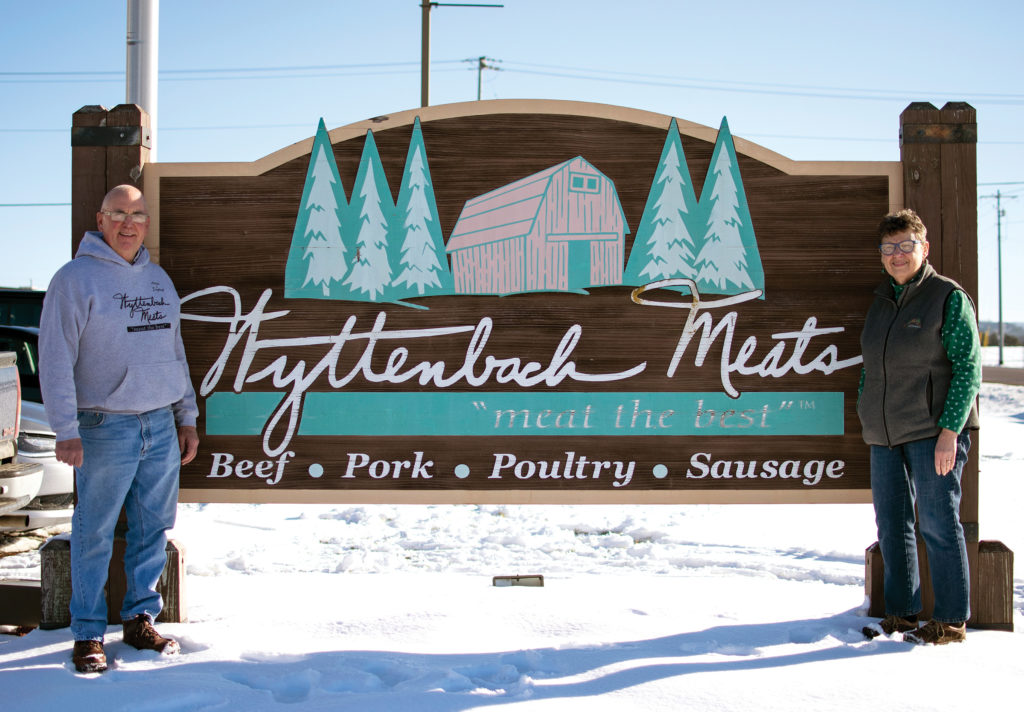 Sauk County Farm Bureau members Fritz and Ginny Wyttenbach have long been known in the local community for providing high quality meats even before opening their meat market.

The couple is the third generation on the Wyttenbach family farm, with their son Mark being the fourth.

“We didn’t live on the farm when I was first born, we moved there when I was 10 years old,” Fritz explained. “My grandpa did most of the farming. We were just there to have fun. Gradually that changed and my brother and I took on more responsibility over time.”

Today, Fritz and his son Mark raise 1,000 head of dairy steers for partnering dairies and farm 400 acres of owned land in addition to some rented land. The Wyttenbachs harvest all corn silage from their land and buy other feed ingredients such as distillers grain, dried corn and dry hay.

“We end up buying a majority of our feed and for us this works out fine because the only machinery we have invested in is our feed mixer and manure spreader along with a couple loaders,” Fritz said.

The couple has been selling beef from the farm for quite some time and through customer feedback, they knew they
had something special.

“We were selling beef halves and quarters off the farm and customers were telling us they couldn’t get that kind of quality anywhere else,” Fritz said.

Being an entrepreneaur-minded farmer, Fritz had an idea to start a meat market.

After years of planning and preparation, the couple selected a plot of land north of Prairie du Sac in an area that was expecting future business and housing expansion. After constructing a meat market from the ground up, Wyttenbach Meats opened its doors in early April 2002.

The first few years presented a number of challenges, but Fritz said they were not unlike the challenges they faced on the farm.

“At times, it can be challenging – as any small business owner will tell you,” Fritz said. “Some things about owning a business are very much the same as farming – its hard work, long hours and sometimes low pay.”

Fritz’s advice to other farmers looking to pursue a value-added venture is to be sure you consider every expense the business will incur and calculate what the profit margins will be. He says always pursue your dreams but proceed with caution and make sure you ask a lot of questions because you will learn things that will make you better prepared to weather the challenges that owning a small business presents. 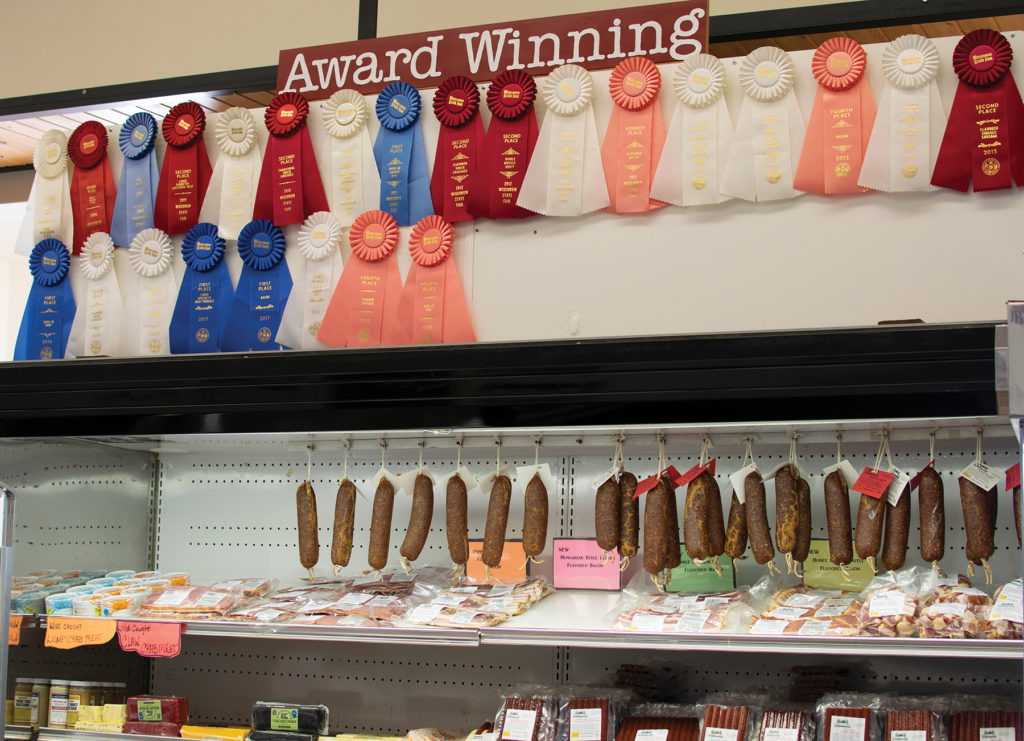 Quality is king for the Wyttenbachs. They differentiate their product by ensuring their customers will consistently get high-quality meats from their store.

“When we started the meat market we wanted to be known for high quality, not low prices, and we are very proud of the quality meats we have to offer,” Ginny explained.

“It’s not the cheapest, but it’s the best,” Fritz proudly added.

Some of the beef that is sold at the market comes from the Wyttenbach farm. This allows the family to control the quality from the farm to the meat market. The Wyttenbachs know the quality of the feed that is given to the steers and the daily care routine. This all adds up to a high quality end product for consumers.

“We try to use as much of our own beef as possible, but there are times of the year where we have gaps in processing availability or higher-than-normal demand,” Fritz explained.

“Any time we purchase beef, we always make sure it is Choice Angus or better,” Ginny added. “We only purchase quality meats because that is what we have built our business around and that is what our customers expect.”

The same quality can be expected from the pork and chicken that they family purchases, along with the venison processing they offer.

The Wyttenbachs also take pride in their smoked meat and sausage products, which they credit to Keith Gritt, their sausage maker for the past 11 years.

“We have an excellent sausage maker and if you look in the retail section of our store you can see all the awards he has won,” said Ginny. “He wants to be critiqued and learn how he can get better.”

A quick glance around their store showcases just a few of the awards that Wyttenbach Meats has won during the last 16 years. A few of their most prominent accolades include: grand champion bacon at the 2017 Wisconsin State Fair, champion cottage bacon at the 2017 American Association of Meat Processors Convention and two first place finishes in the 2018 Wisconsin Association of Meat Processors competition with their Sauk City Bologna and smoked bratwurst.

Made from a 90-year-old recipe that originated in the area, the Sauk City Ring Bologna is one of the store’s flagship products.

“We always have people stop in and say they grew up eating the bologna and need to stop in when they are in the area because they like it so much,” Ginny said. 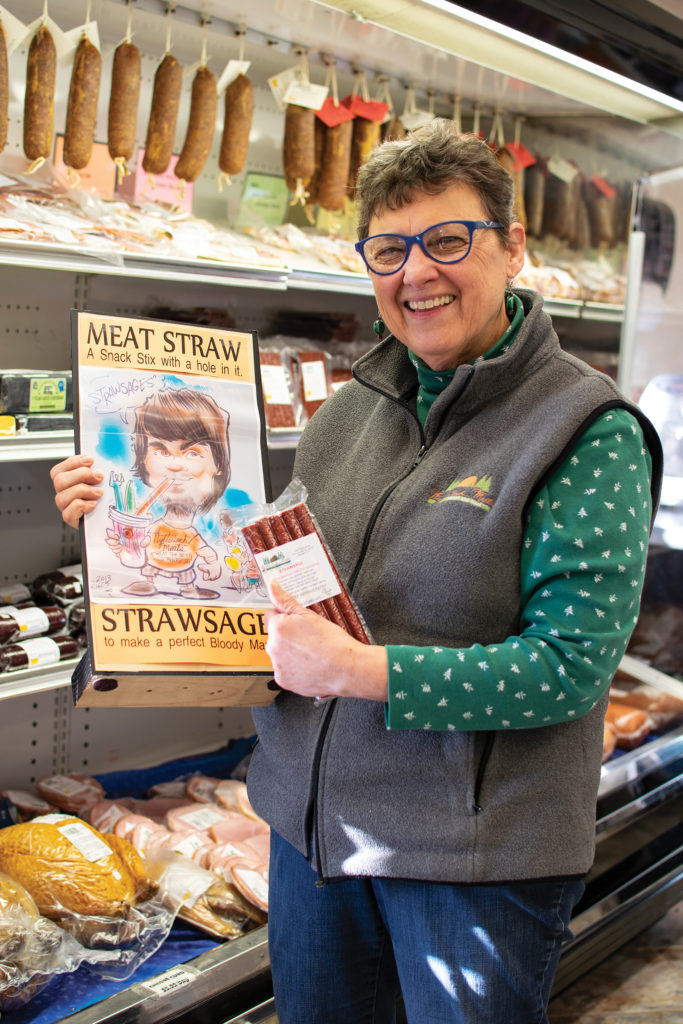 One of the unique products that Keith created is called a ‘strawsage’ which as the name suggests is a snack stick with a hole in the middle that serves as a straw for a Bloody Mary. Wyttenbach Meats partners with Sysco to distribute this product to stores and restaurants across the state and rest of the country.

The couple is known for more than quality products. They are also a source for employment opportunities in the community.

“We try to make this a positive work environment by showing our employees that we aren’t afraid to do any job that they do,” Ginny explained. “We work alongside them, give flexible working hours and always try to give positive feedback. We’ve had people say they worked somewhere for several years without ever receiving a compliment.”

“With such a small number of employees, we are really more like a family,” Ginny said.

In addition to creating a positive work environment, the Wyttenbachs also are passionate about making a positive difference in their community.

“When you have a local business, you need to be involved in your community, which is something we try very hard to do,” Fritz said.

Fritz and a local group, Heroes for Honor, spearheaded Operation Eagles’ Wings in 2016 where he partnered with the Badger Honor Flight, a program that takes veterans to the monuments in Washington, D.C.

“Fritz attended one of these Honor Flights with his uncle and when he came back, he was so moved by the whole experience he knew he wanted to do something to support the cause,” Ginny shared. 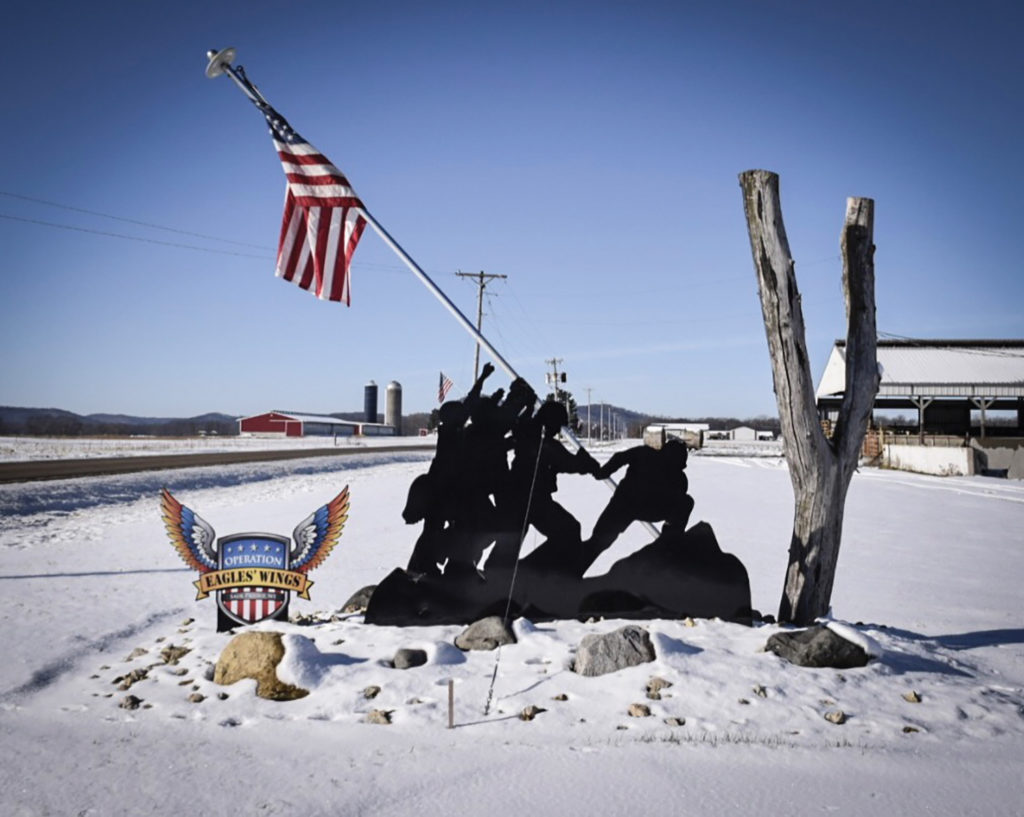 A veteran himself, Fritz worked with local businesses, organizations and individuals to collect donations to cover the costs of an Honor Flight.

The veterans trip is free and normally, the guardian of their choice, pays a small fee to attend. However, Operation Eagles’ Wings raised more than $200,000 – enough to fully fund two Honor Flights. Approximately 180 veterans, their guardians and support staff were able to attend free of charge thanks to the generosity of the Heroes for Honor Committee, Sauk Prairie residents and surrounding communities.

A Voice for Agriculture

The Wyttenbachs have been Farm Bureau members for the past 45 years. The family has opted to sign up both the farm and the meat market as WFBF members because they truly believe Wisconsin Farm Bureau is making a positive difference.

Much like the Wyttenbach’s commitment to providing high-quality meats to their customers, the couple credits their Farm Bureau membership to the organization’s commitment to serving as a voice for agriculture.

“Number one, [Farm Bureau] promotes agriculture,” Fritz said. “They go to bat for you on legislative issues, I like where they stand on the issues and there are less and less people speaking up for agriculture.”

The Wyttenbach family is clearly committed to their farm, local community and standing by Wisconsin agriculture. Their passion and dedication to high quality spans much further than the meat market counter tops.