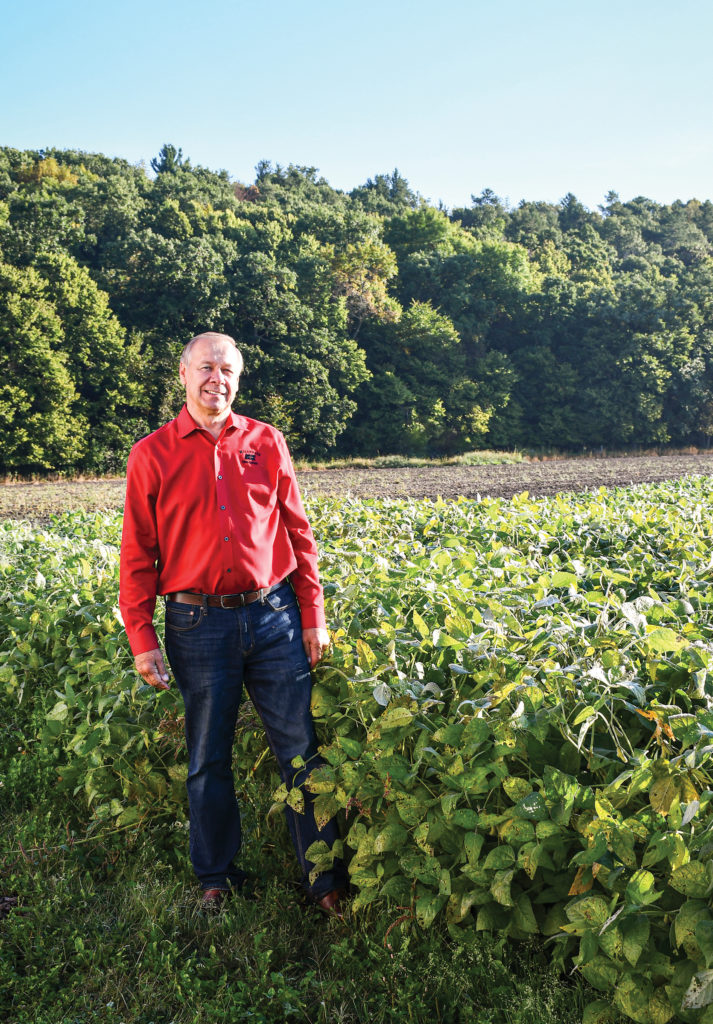 If you peek into Jim Holte’s office, you will quickly observe his true joys in life.

The artwork and family photos showcase his love for his wife and family, especially his grandkids.

The vintage Farm Bureau sign from his grandfather Burt leaning in the window emphasizes just how long-ago Farm Bureau was introduced to his family. However, it wasn’t until he was a young farmer that he would follow the path to Farm Bureau.

Since 2012, Jim has served as the Wisconsin Farm Bureau Federation and Rural Mutual Insurance President. In his first Rural Route column, he wrote about ‘the glass being half full.’ If there is one thing that has carried him through his presidency it’s his desire to maintain a positive outlook, no matter the circumstances.

“I have always placed a high value in building relationships with other groups and individuals during the good times because we often rely on each other during the difficult times,” Jim said.

In 1976, after graduating from UW-River Falls and marrying his wife Gayle, Jim began renting his grandfather’s farm.

He milked cows until the 1990s when he decided he couldn’t commit to a life of dairying because of the pressure on his body and no relatives wanting to farm.

He converted the farm to grow grain and raise beef cattle. Since the transition, he has grown a corn and soybean rotation and now works closely with UW Discovery Farms to do on-farm water research. He raised 350 to 400 beef steers annually but drew back once Farm Bureau duties demanded his time.

His start in Farm Bureau began with a simple ask from a farmer in the area.

“I was asked by the well-known Carl Casper to join Farm Bureau,” Jim said. “I didn’t know what that all entailed at the time but slowly it was explained to me and soon I was participating in young farmer events and activities.”

His involvement led to him serving on the Dunn County Farm Bureau board of directors before spending five years as the county president.

“It was when I was given the opportunity to serve as county president that I was able to see a broader view of the organization,” said Jim. “I appreciated the grassroots approach that Farm Bureau had. The tough questions and discussions started at the county level and then made their way up to state and national levels.”

After gaining experience on the county level he was asked about participating in state-level activities.

“I remember the day I received an invitation to be part of the state livestock committee and attended my first meeting,” said Jim. “WFBF Board member Bill Hanson chaired the committee and he later served as vice president for WFBF. There’s been a long list of leaders I have grown to know and appreciate through the years and that’s something I will not take for granted.”

Knowing his predecessor’s time on the board was nearing an end, Jim considered running for the position which included a seat on the Wisconsin Farm Bureau and Rural Mutual Insurance boards.

“I participated in the Wisconsin Rural Leadership Program, which is a two-year commitment,” Jim explained. “During those two years, I had to cut back on commitments to other organizations, but as my time in the leadership program drew to a close, I knew I wanted to become more involved in other activities particularly with Farm Bureau and local boards.” 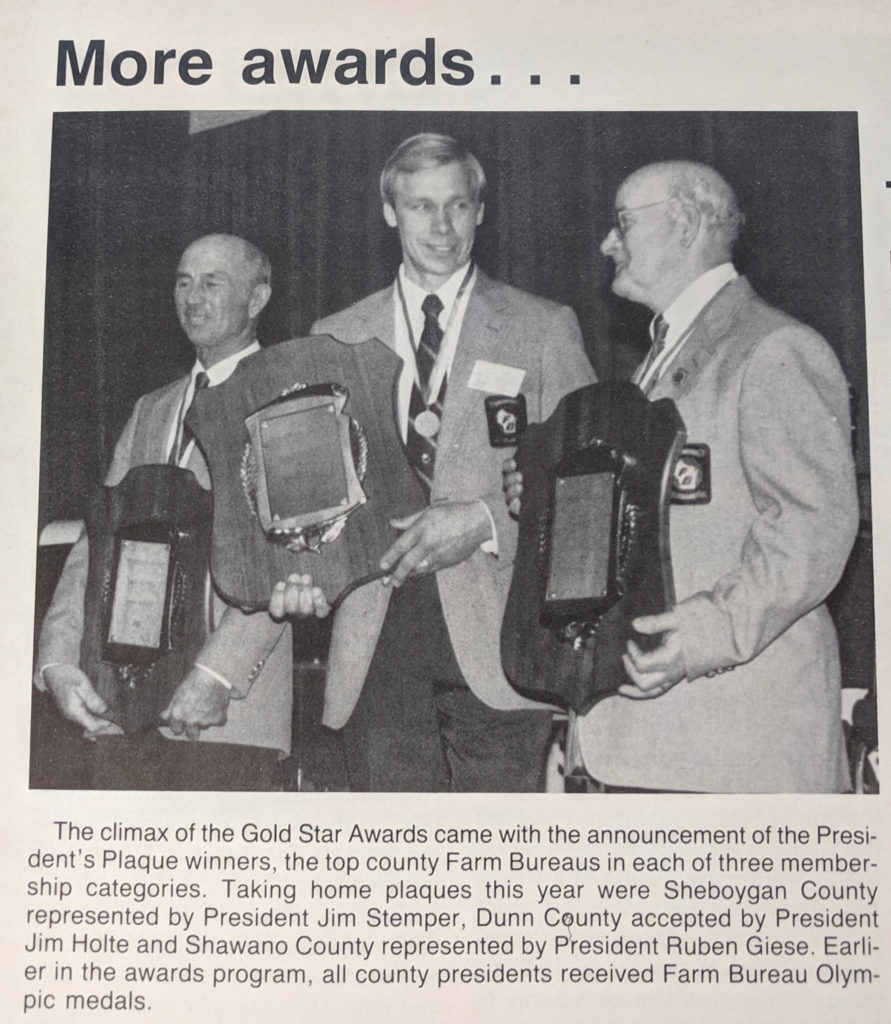 He also aspired for a seat on the Elk Mound School Board. Not knowing if he would be successful, he ran for the school board and the WFBF Board, ultimately getting both seats.

“It was a hectic time when I began in both roles,” said Jim. “Both were important to me but eventually I didn’t seek re-election for the school board because it was just too much.”

Jim was elected in 1995 to represent WFBF’s District 9, which consists of Barron, Chippewa, Dunn, Pierce, Polk, Rusk, Sawyer and St. Croix counties as well as the Superior Shores Farm Bureau made up of Ashland, Bayfield, Douglas and Iron counties.

During his tenure, Jim had the privilege to serve in many roles including on the American Farm Bureau Board of the Directors.

“I’m extremely grateful for the opportunities I’ve had while involved in Farm Bureau,” said Jim. “Through my involvement on the American Farm Bureau Board of Directors, I have met many other state leaders and they all have one thing in common – a connection to agriculture. These people are just like my neighbors down the road and that is what makes our organization so strong.”

During his tenure, he hosted U.S. Department of Agriculture Secretary Sonny Perdue on his family’s farm, provided testimony to the U.S. Senate

Environment and Public Works Committee on modernizing the Endangered Species Act in Washington, D.C., and has appeared dozens of times on RFD-TV.

In his role as president for WFBF, Jim also serves as president of the Rural Mutual Insurance Company Board – a learning opportunity that he is grateful for.

“The biggest learning curve I had was being involved with the Rural Mutual Insurance Company Board of Directors,” Jim said. “I learned a great deal about the insurance industry and really got to understand how great of a member benefit it is to have an insurance company dedicated to Wisconsinites and Wisconsin farmers.”

It’s the close relationships at the county level that brought Jim into the Farm Bureau family. It was from these connections that his admiration for the organization blossomed into a desire to have a hand in its future.

“I will never forget the people I have met who have guided me through my Farm Bureau journey and the experiences this organization has provided,” Jim said. “Our organization is special because we are here for farms of all types. Many voices coming together in unison isn’t always easy but is why we carry the reputation we do on Capitol Hill.”

Jim says membership has shown its strength through the years with participation, attention to details and determination.

“Our members are working hard every day to feed those around them,” Jim added. “If they make time to be involved in Farm Bureau, we take that very seriously. Our members are our foundation and I hope we have served them well and will continue to.”

Jim added that it’s the people who make Rural Mutual Insurance and Wisconsin Farm Bureau the organizations and businesses they are.

“I have had the privilege to work with the variety of employees throughout Wisconsin Farm Bureau and Rural Mutual Insurance,” added Jim. Their professionalism and dedication to their organization and business are second to none. I am proud to have had a small role in the success of carrying out our goals and initiatives.”

As he heads into the next chapter, he looks forward to spending time with his family, especially his wife and grandchildren.