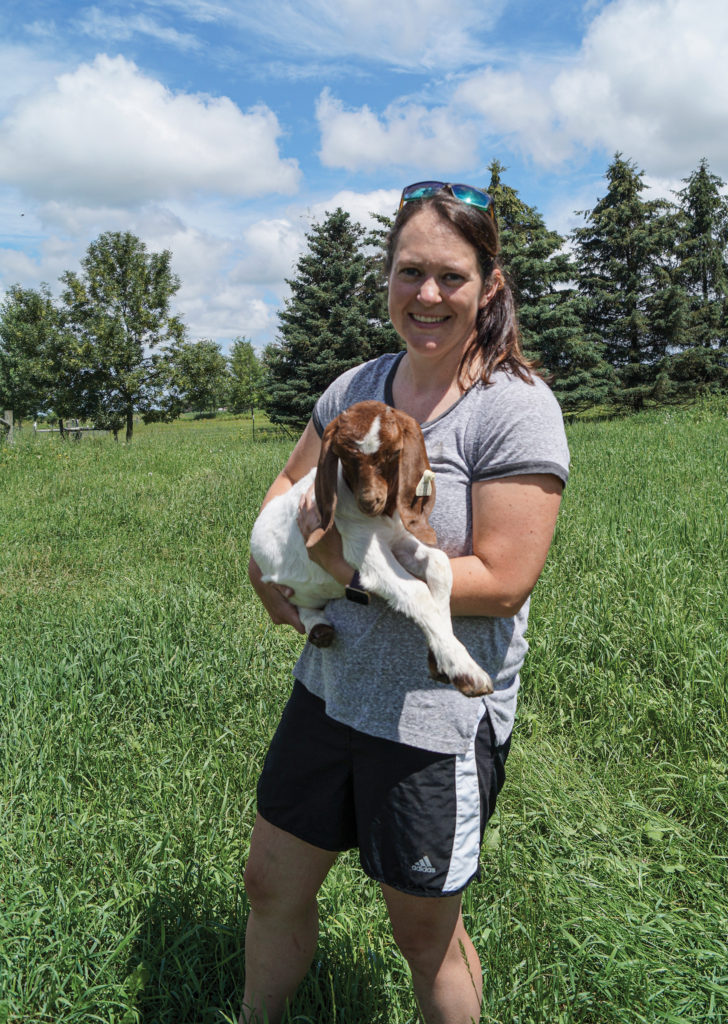 “There is no way I would’ve believed you if you told me that I would grow up to be a goat farmer,” laughed Leslie Svacina.

The young farmer from St. Croix County owns Cylon Rolling Acres, a meat goat farm in Deer Park. While she didn’t grow up on a farm, Leslie knew from her involvement in FFA that she wanted to work in agriculture. She never predicted working in production agriculture.

“When I was looking at careers, I didn’t initially see production agriculture as an option for me,” said Leslie. “I was going to be working in a position that was going to support farming and encourage others to join the industry.”

She began her career in agricultural communications in Minnesota. Later, she transitioned to working in career advising in Wisconsin and Minnesota but felt disconnected from agriculture.

“I just felt like there was a piece of me missing,” said Leslie.

As Leslie and her husband, Scott, discussed their future they talked about buying land and what was the next step for them and their growing family.

With Scott secure in an agri-business career, Leslie knew that she would have to maintain any farming entity they started by herself. 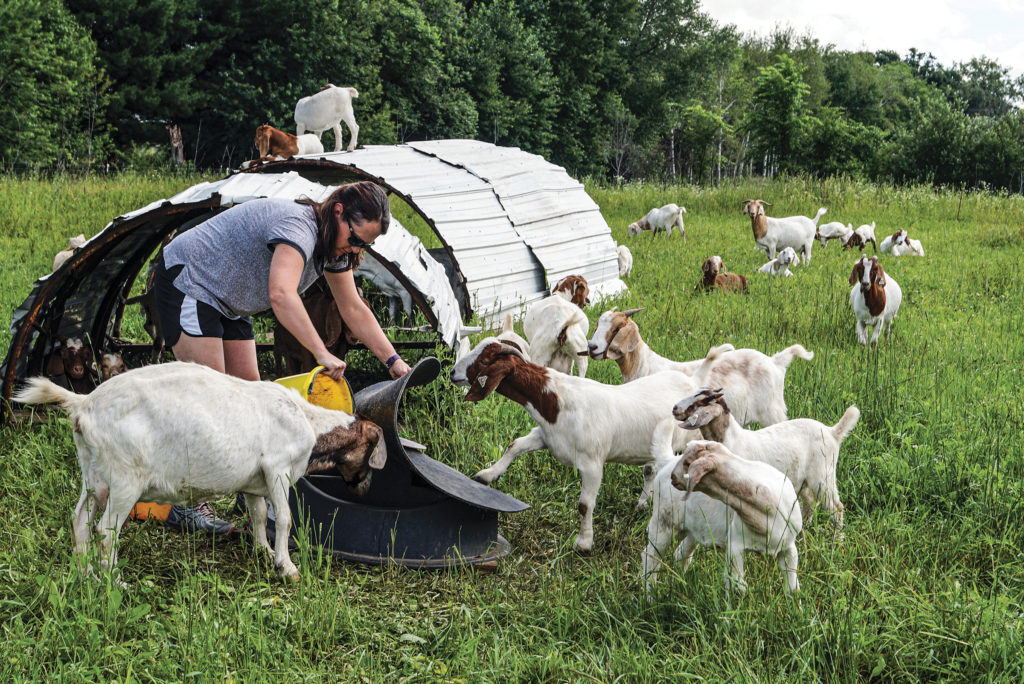 “It seemed like no amount of land was enough if we wanted to do some kind of farming,” said Leslie. “Goats were an opportunity for me to manage solo. Specialty markets are a way for young business owners to enter into the industry.”

Even though she didn’t grow up on a farm, her parents ran a small business.

“You could say that I have entrepreneur spirit in my blood,” added Leslie.

After doing more market research, Leslie found that goats were something in demand, especially with the diverse group of people in nearby Minneapolis-St. Paul.

According to Leslie, most goat meat is shipped in from Australia because it’s not something readily available in many U.S. markets.

“There was an opportunity for me to break into that market for people who wanted a local option,” she explained.

Starting with just nine goats, the herd has grown in the last six years. Last year she had 120 goats, which also included raising bottle-fed buckling goats for meat from goat dairy farms in the area. Leslie admits this was too much to manage since the dairy bucks required so much extra attention and more inputs compared with her meat breed herd. Now, she has a herd of 40 breeding does with a goal of about 60.

With her chosen method of rotational grazing, it takes seven months for an animal to reach market weight. Most of the herd are Boer goats, the ‘Angus of meat goats’ as Leslie phrased it. She also has been starting to breed with Kikos, a breed from New Zealand, for a heartier animal.

As the business grows and settles into a manageable normal, Leslie continues to seek what is the best fit for the ‘one-woman operation.’ She does direct marketing but recognizes that it takes a lot of time to build relationships and deliver a customized product. Recently, she has found success by focusing on larger wholesale buyers.

“I have been working with a couple of local restaurants to carry our product. I think that is a good avenue to pursue, along with other retailers to incrementally grow the business,” explained Leslie.

Transportation needs, space and storage concerns and food safety are things that need to be considered as the business moves forward. She also is making headway into the ‘foodie’ scene.

“The foodie crowd is always excited to try something new and learn more,” said Leslie, “Especially a new type of protein.”

At the end of the day, some of the best experiences have been her customers sharing special occasions with her.

“Goat meat is tied to many cultural celebrations,” she explained. “It’s more than nutrition. My product plays a role in celebrating an occasion. It’s a centerpiece of a family tradition. These families are grateful to have somewhere local to go for this product and I’m happy to be the farmer to supply it.”

After working some time in agriculture in the Minneapolis-St. Paul area, but still living across the border in western Wisconsin, Leslie found herself looking to connect with other Wisconsin ‘aggies.’ You could even say she grabbed the goat by the horns in learning more about Farm Bureau.

“I was the one who reached out to our county president to learn more about the organization,” she explained. “I had some friends who were involved in the Young Farmer and Agriculturist program, so I knew a little about their experiences.”

She attended events such as the dairy breakfast and the Farm City Day and slowly became more involved.

“I have always been one to seek professional development; it’s something that’s important to me,” she explained. “I decided to do the WFBF Leadership Institute and asked the county for support in doing the program.”

After the county Farm Bureau agreed to support the leadership training, they asked her a question.

“They asked me to serve on the board,” Leslie said. “While it was something I had thought about doing further down the road, I decided, why not? When they want to invest financially in you, you feel obligated to give back.”

When asked about serving as the vice president on the county Farm Bureau board, Leslie said she would consider it. It was after she was elected, she found out it was the position on the board that worked on policy.

Serving in this role has made Leslie aware that she needs to be involved in policy discussions, especially in her local area.

She added, “I have always been interested in education and leadership, and this gives me a platform to grow in those areas.”

Because there isn’t an official meat goat organization in Wisconsin, Leslie looked for an outlet for resources, leadership opportunities and a platform to express her opinions.

“Sometimes people are surprised that I am a Farm Bureau member,” said Leslie. “Farm Bureau is a general agricultural organization and I recognize that strength is in numbers. It’s important to be active in the industry and I like being involved in an organization that is well-respected.”

The variety of relationships is something Leslie values in her Farm Bureau membership. For example, this year after she decided to grow hemp for the first time, she leveraged many connections to learn more about the reintroduced crop.

“There’s value in explaining what I do on my farm and networking with other farmers,” said Leslie. “We do have similar goals of getting a quality product to our customer. No one does anything the same in farming so we can learn a lot from each other.”

Through her Farm Bureau involvement, Leslie has learned the value of speaking up and being engaged in policy discussions.

“I have learned that relationships carry a value with those who make decisions,” said Leslie. “That is definitely something Farm Bureau has taught me.”