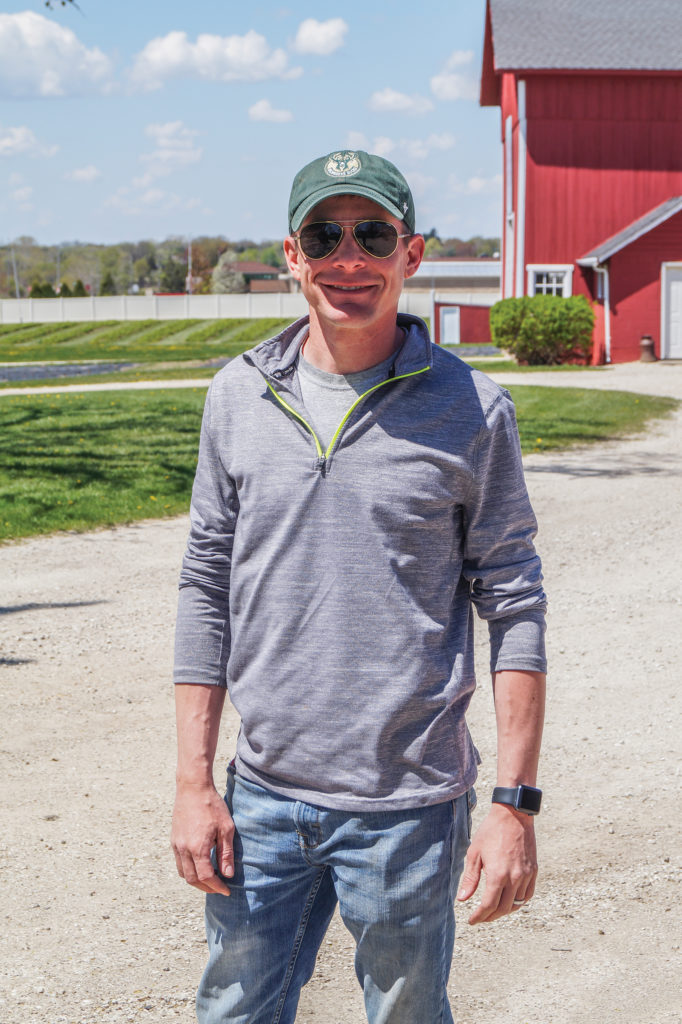 Located on 75th Street in Bristol, the farm is positioned almost exactly between Lake Geneva and Chicago’s northern suburbs. While the farm thrives in its current location, the Thompson farm wasn’t always placed along a tourist-driven roadway and wasn’t always a berry farm.

In the late 1960s, the farm moved to Bristol after the building site for UW-Parkside overtook the family’s co-owned apple orchard.

Now, fourth generation farmer, Scott Thompson is building on what his father and grandfather started.

“Fifty years ago we were an apple orchard,” said Scott. “After the move, my grandpa knew that apple trees would take too long to grow, so he went into strawberries and we’ve been doing it ever since.” 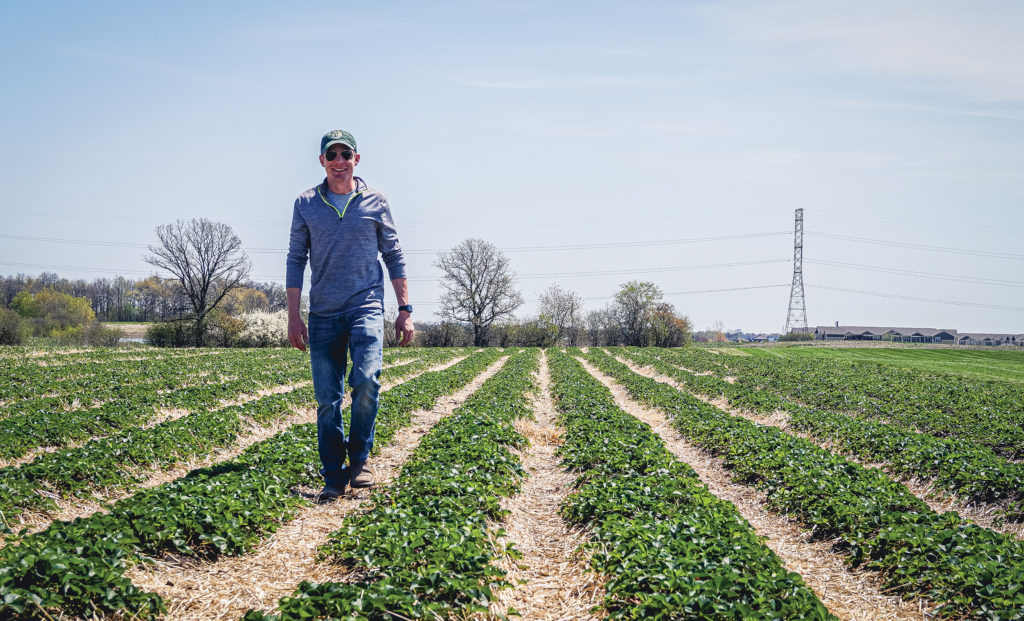 Scott and his wife Megan live in the 1850s farmhouse, on the berry farm, with their three young children. Scott’s dad, Jeff, lives in the other house on the farmstead with his wife Marcia. Together they are working on a succession plan to allow Jeff to transition out of the business.

“I don’t think (my dad) will ever retire or stop giving his opinion,” Scott chuckled. “Though I’m grateful to have him around to ask questions and he still does a good portion of the paperwork. He used to tell me what we were doing each day, and now he asks me instead.”

Scott has two older brothers who live nearby. While the brothers don’t work in agriculture, the farm does serve as a good meeting spot for the families.

Taking over the farm wasn’t much of an interest to Scott, especially during high school. After a couple of years in college at UW-Oshkosh, he decided that “farming wasn’t too bad.” He finished his degree in geography and went to work full-time
on the farm.

While he was a substitute teacher at an area school in the winter seasons for many years, his marketing and business classes have come in handy when working with his customers. Scott estimates 75 percent come from the Chicago-area.

“People come here because they want the experience and to be in the country,” explained Scott.

Among the farm’s customers is a large percentage of Polish immigrants and descendants who live in the northern Chicago suburbs.

“On Saturday mornings you hear more Polish speakers than English,” added Scott. “They grew up picking berries and they pick quite a few to take home with them.”

While strawberries are highlighted in the farm’s name, the farm also sells fall raspberries and pumpkins.

Fall raspberries are the preference for the family because of the timing of harvest.

“Families are looking for something to do in the fall so this gives them an option,” said Scott.

The season for the you-pick raspberries starts in August and goes until October. Multiple varieties are used to spread out the harvest times across a few acres.

The farm doesn’t necessarily do things the standard way for a pick-your-own farm. For example, their pumpkin sales are unique because they sell them by the carload.

“We sell them at $70 per carload, unless you have a truck or SUV, then it’s a little more,” said Scott. “Everyone sells pumpkins, so this makes us different. We just plant a variety of pumpkins and gourds and let people go out to the field and find the ones they like.”

While Scott and his employees get a variety of questions
from customers, Scott is hopeful that their interactions on the farm are “slowly helping people learn about farming.”

The farm provides care instructions and gives customers recipe ideas on its website.

Learning is something that Scott continues to do himself. As a past president of the North America Berry Association and through his involvement in the Wisconsin Berry Growers he stays up-to-date on his berry knowledge. He also has used social media to ask questions of other berry growers around the world. 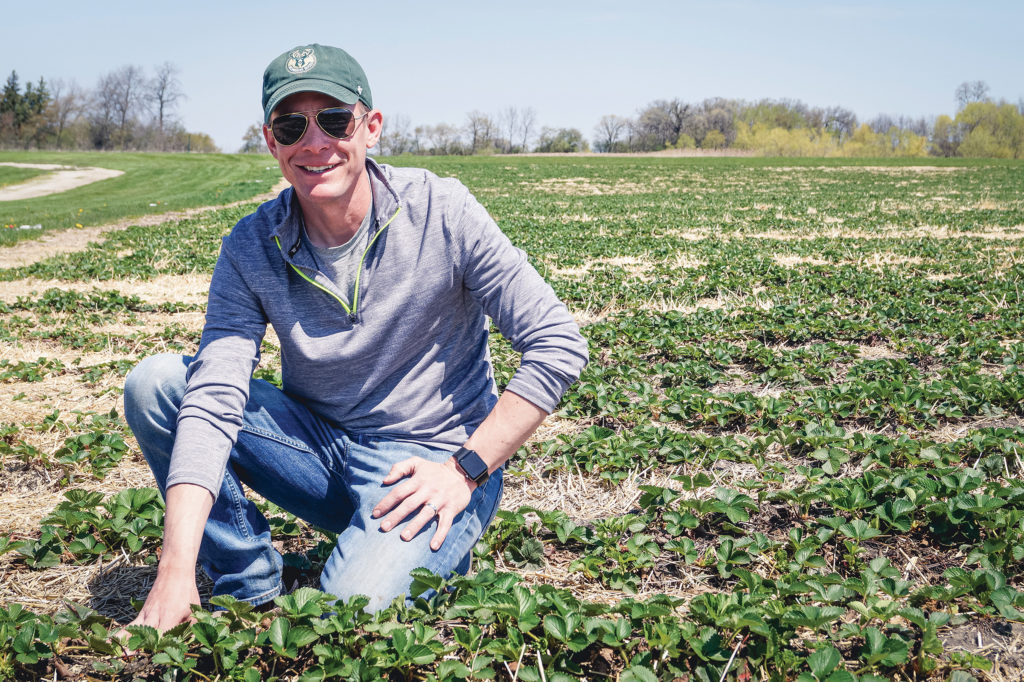 Scott became involved in Farm Bureau when his dad was on the Kenosha County board.

“My dad was on the nomination committee for new board members and I was the chosen one,” Scott smiled. “At first, I wasn’t very happy but now I’m really glad my dad got me involved. I think it’s a great organization.”

“(Because of Farm Bureau) I think that if an officer stopped me, I would know more about being in compliance than he would,” added Scott. “That’s good in my book.”

To learn more about the Thompson Berry Farm visit, thompsonstrawberryfarm.com or find them on Facebook.