Reflecting on the Early Days 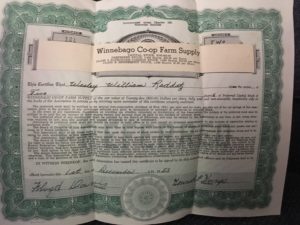 Now $50 in 1953 was no inconsequential amount of money.  I remember in the early 1960s I was able to do all my Christmas shopping for the family with 5 bucks (no, I wasn’t that cheap, $5 just went that far back then).  According to dollartimes.com that $50 in 1953 adjusted for inflation would have a value today of $470.47!!  Wow!  Thanks Dad, that was a very thoughtful gesture. Being less than four months old at the time I really didn’t appreciate it until later when I was involved in my farming career. I did keep the original certificate through the years, however. Unfortunately, somewhere in the mid-80s it lost all value except as an antique document and a tax write-off one year. I didn’t ask Dad how much he invested in the organization himself and I don’t recall him ever telling me, but I imagine he had some skin in the game, too. He was always that kind of person.

The moral of the story is that all the things we invest ourselves into involve risk, and even though my two shares of stock have no dollar value today, I reaped a lot of value through patronage with my farm cooperatives over the years, so I still consider it a good investment. One hundred years ago a group of farmers created a farm organization and called it the Wisconsin Farm Bureau Federation. They invested their time and money because they felt it could benefit them. There have been a lot of ups and downs over the last century, but I’m proud to say I’m part of this organization that’s still here serving farmers today.

Wes is the District 7 Coordinator for the Wisconsin Farm Bureau Federation. He works county Farm Bureaus in northeastern Wisconsin to enhance programs, encourage grass roots involvement, and promote membership. Wes grew up on a dairy farm near Oshkosh. Wes, and his wife Cindi, live in Suamico, near Green Bay.