Governor Scott Walker signed a bill into law that clarifies definitions of farm machinery, and makes it legal to operate such equipment on public roads. 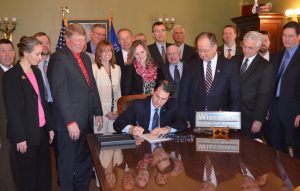 Passed by both houses of the State Legislature earlier this year by wide bipartisan margins, the legislation was authored by State Senator Jerry Petrowski (R-Marathon) and State Representative Keith Ripp (R-Lodi). Senate Bill 509, now known as Act 377, was signed by Governor Walker on Wednesday, April 23.

“We applaud Governor Scott Walker and the State Legislature for their efforts,” Holte said. “It’s now up to farmers to talk with their local officials about how this law will be implemented in their town and county.”