EPA Unleashing a Flood of Regulations

If there’s a wet spring, I can bet the farm that I will have standing and flowing water. This has always been a reality for those who farm in the Town of Spring Brook’s Section 35.

My connection to this part of Dunn County known as the Chippewa Bottoms began when my Norwegian great-grandpa immigrated here to become a logger. After the trees were gone, he began farming the flat landscape. I’m proud to be the fourth generation to farm here. While I respect great grandpa for picking an area without rocks, its location in a floodplain sometimes causes me to scratch my head.

My annual worry that spring rains will delay my planting schedule now pales in comparison to the troubling flood of regulations that the Federal Government is about to unleash on farmers. 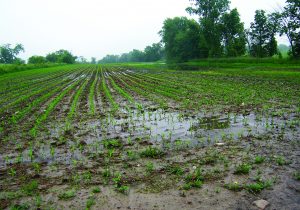 The Environmental Protection Agency and the Army Corps of Engineers finalized a new regulation last month that expands their powers to regulate almost any land where water pools or flows at any time, or has in the past 100 years. That new rule will be effective and enforceable by the Federal Government by the end of the summer.

I have ditches and ephemeral drains that move channeled rainwater off my farm after a moderate rain – the new rule makes those “tributaries.”  As a result, I cannot plow through them or apply a single drop of fertilizer or pesticide into those drains to combat insects and weeds – effectively imposing a buffer – without a federal permit.

That is not all. The new rule regulates all waters within the 100-year floodplain (up to 1,500 feet) of these so-called “tributaries” – calling them the “adjacent waters.” Most of my farm falls in a floodplain and any of my farm’s low areas (which the Corps would likely call a wetland) are now regulated by the rule. Without a permit, I cannot farm them either.

So how does this happen? Federal agencies can propose any rule they wish, allow time for interested parties to comment on it and then accept or ignore any or all comments and declare it the law of the land without a vote or meaningful review of any kind from Congress.

That’s exactly what has happened.

Welcome to more red tape, higher costs, delayed decisions by agencies responsible to nobody, enforcement actions and third party litigation from environmental activists near and far. This certainly will burden the economy but can anyone guarantee it will advance any of the objectives of the Clean Water Act?

So what do we do? Each of us needs to ask our two U.S. Senators to act to stop this power grab. A bill to do this has already passed the House.

There is not a single Wisconsin farmer who is too busy to make these two phone calls. If you think that you’re busy now, consider filling out numerous forms for permits on each field you wish to crop next year and in subsequent years.  Consider asking the Corps of Engineers to inspect your farm just to determine if you can plant seed, kill weeds and provide your crops the nutrients they need simply because some channeled water runs in or around your farm. Or, because a single isolated wetland can be found there.

This is gravely important to all of Wisconsin agriculture. To put it mildly, wet fields next spring will be the least of our concerns if some federal bureaucrat decides to place our farms between a rock and a hard place.

Jim Holte was elected president of the Wisconsin Farm Bureau Federation in 2012. He was elected to the WFBF Board of Directors in 1995. He represents District 9 which consists of the Barron, Chippewa, Dunn, Pierce, Polk, Rusk, Sawyer and St. Croix county Farm Bureaus as well as the Superior Shores County Farm Bureau (made up of Ashland, Bayfield, Douglas and Iron counties). Jim was elected to the American Farm Bureau Federation Board of Directors in January of 2015 as a representative of the Midwest region. Jim and grows corn soybeans and alfalfa on 460 acres of land south of Elk Mound. He also raises beef steers. He and his wife, Gayle, have two children and four grandchildren.