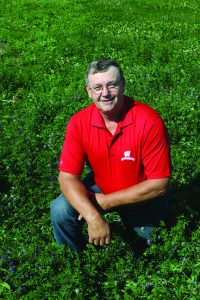 Bill Bruins is not a nostalgic man.

“It’s not who I am,” he said during a recent interview on the deck of his rural Waupun home. “It’s not time for that. I still have things to do and missions to accomplish. It doesn’t pay to look back, but to learn.”

But look back is what we did as Bruins prepares to wrap up his nine-year tenure as president of the Wisconsin Farm Bureau Federation and Rural Mutual Insurance Company in December. Over the course of an hour, Bruins filled in the gaps of how a once painfully-shy child came to lead the state’s largest general farm organization, and how singing helped make it possible.

Roots Run Deep
On one hand, you could say that Bruins never made it very far. He and his wife, Mary, live in a new home next to the farm he grew up on.

Born the second youngest of five children, he remembers a childhood spent outside by the river and working with animals.

“My roots go deep in agriculture. I love every facet of it,” he said. “It just became a part of my life.”

Over the years his family farm has evolved into a family partnership known as Homeland Dairy in rural Fond du Lac County. It consists of a 550-cow dairy and a nearby beef farm where Holstein steers are raised. His two sons, Jon and Joel, have taken over day-to-day operations of the farms.

“I couldn’t ask for better business partners,” he said with pride. “They really stepped it up a notch when I became (WFBF) president.”

Bruins knows something about having to step it up. 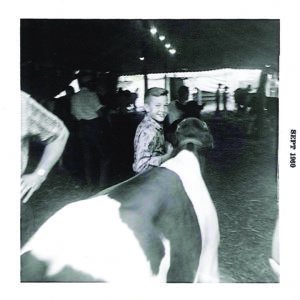 “When I was 10, my only brother, who is eight years my senior, left for college in Michigan. I’ve forgiven him, but all of a sudden I became number one chore boy.”

Although that chore boy now finds himself in board and hearing rooms across Wisconsin and the nation, his mind is always thinking of new ways to do things around the farm.

“Sometimes my boys tell me, ‘Can’t you just shut your mind off?’” he said with a laugh.

A Farm Career Comes Into Focus
When asked if he ever thought about being anything other than a farmer, Bruins recalled how he felt after his three older siblings had all left home for college.

Although he had taken college-prep courses instead of agriculture classes in high school, he said “Nobody had really asked me if I was going to go. I wasn’t ready to make hard and fast decisions in my life.”

He ended up enrolling at nearby UW-Oshkosh like his sister, Gail, before him. He lived in the dorms, but came home every weekend to farm.

“I hated the city life,” he said. “It was that year I realized I didn’t want to do anything but farm.”

Eager to begin farming full-time with his father, he spent the next two winters attending the UW-Madison’s Farm & Industry Short Course. Initially, he “farmed for a wage” from his father, but formed a partnership after becoming engaged to Mary in 1970. They would only farm together for the next six years before his father died unexpectedly at the age of 62.

His father had interests in other farms, which added to the complexity of selling the estate.

“I learned a lot about the business aspects of farming and generational transfer, and how you don’t want to do it,” he said. “It’s critical to the future success of farming. It did a lot to shape my view.”

A Revelation
For 30 years, Bruins was part of a gospel quartet called The Revelations. Introducing each song gave him exposure to speaking in front of an audience and thinking on his feet.

“It gets you to get over your stage fright,” he said. “I had been a very shy kid.”

“We bought and paid for two vans, and basically wore them out,” he said of the 80 to 90 performances annually at over 500 different churches in the Midwest.

The Revelations also recorded many records and cassettes during the 1970s and 80s.

“I have no idea how I managed to do all that, other than having Mary to hold down the fort. She’s allowed me to be what I’ve become,” he said.

First Farm Bureau Memories
With an early interest in the political aspects of Farm Bureau, it was Mark Landmark, a former field representative, and Jim Warner who convinced Bruins to participate in his first Young Farmer Discussion Meet.

After winning the district meet, the state competition was set for a Sunday in Madison. Although the tongue of a manure spreader had recently broken Bill’s father’s foot, the discussion meet alternate declined to participate.

“So with 100 cows to milk, Mary and I did chores and raced to Madison. I did the quarter, semi and finals, and took off for home to milk and do chores again,” Bill recalled. “Around nine or ten that night the Farm Bureau board director for District 5 stopped by my house to tell me I had won.”

“I went on to compete in St. Louis,” he said. “That was the start of my Farm Bureau career. I was hooked.”

He called serving one year on the state Farm Bureau board of directors as chairman of the state Young Farmer Committee a “fantastic learning experience.”

“I remember learning a ton, but naïve was probably not a strong enough word to describe what I was,” he added.

Leadership Lessons
Don Haldeman was president at the time, and Bruins took note of what makes a good board member and how meetings should be run. His involvement has never stopped at Farm Bureau. He and Mary spent a decade as general leaders for a 4-H club, and he has attended countless meetings for his church and beloved Alto Fair.

“I enjoy working with people,” he said. “You never get all you want working collectively, but you always get more than you would have working by yourself.”

Recently, he has been elected to the Waupun Board of Education and was appointed by Governor Scott Walker to the state’s Natural Resources Board.

“Bill has brought a strong voice for agriculture to the board, something that was notably absent before,” said Department of Natural Resources (DNR) Secretary Cathy Stepp. 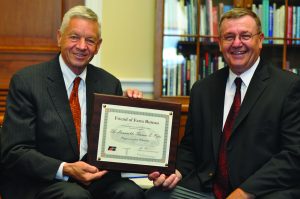 With agriculture encompassing nearly 15 million acres of Wisconsin’s landscape, there is no shortage of ways that agriculture touches water and wildlife issues. Bruins says the best praise he has been given about his role on the DNR board is his common sense approach.

“I think it comes from running a farm. They say necessity is the mother of invention. No where is that more evident than on a farm where you can’t walk away from a problem. You just find a way to fix it. That’s the approach I take to the DNR board,” Bruins said.

The ability to take criticism is “a must” when assuming a leadership position; Bruins said how to react to it correctly is invaluable.

A New Door
When former WFBF President, Dan Poulson, turned over the proverbial keys to the Farm Bureau to Bruins in 2003, it came in the form of two things, a bottle of aspirin and a small plaque that read, “Your attitude determines your altitude.” Convinced that the organization will not miss a beat, Bruins does not plan on leaving anything for his predecessor.

When Bruins first assumed the WFBF presidency in 2003, a newspaper story noted that it was a Dutch tradition that “every new owner hangs a new door” on a farm.

Nine years later, Bruins is still proud of his Dutch heritage, and intends to remain active in Farm Bureau and use his past experiences as building blocks for the future. It will be without nostalgia that he walks out the door he hung without looking back.