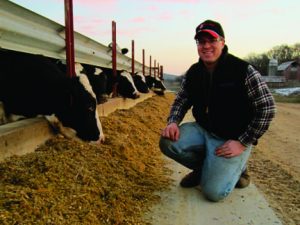 Most farm kids have an area of specialty in agriculture, but Ethan Giebel says, “I feel like a jack of all trades, master of none.”

His farm background includes harvesting crops, milking cows for his grandparents, raising beef cattle and hogs with his parents and showing sheep at the fair. This UW-Platteville junior said it wasn’t until he went to college that he realized not all farm kids have the diverse ag background that he grew up with.

That background served him well as he competed and won the 2014 National Collegiate Discussion Meet at the American Farm Bureau Young Farmer & Rancher Leadership Conference in Virginia Beach on February 8.

“I was nervous but I was comfortable with my preparation. The more prepared you are the more confident,” said Ethan who competed against 52 other collegiate Farm Bureau members from 36 states. 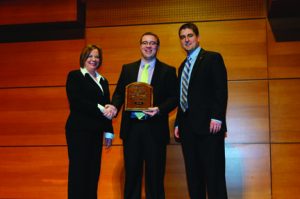 His victory was a culmination of five years of competing in similar competitions. He won the state FFA competition as a Mauston FFA member in 2010 and two years ago he finished in the top four of Wisconsin Farm Bureau’s Young Farmer and Agriculturist Discussion Meet. To qualify for the national competition, he first won the UW-Platteville contest last fall and then the state collegiate competition at the WFBF Annual Meeting in December.

“Ethan is an outstanding Discussion Meet contestant because he brings so many abilities and skills to the contest,” said WFBF’s Director of Training and Leadership Development Dale Beaty. “He grew up on a farm, so he really knows farming and agriculture; that’s something I cannot coach. He is quick-witted, an excellent extemporaneous speaker and he executes what he has been coached on to perfection.”

Ethan earned a $2,500 scholarship for his efforts, but he raves more about the ideas that came from the discussion and how he hopes it will go beyond just the competition.

“Not only are you discussing among the discussion meet participants but you have an audience that is listening as well and maybe you have presented an idea for the first time that triggers discussion among the audience. Perhaps someone in the audience will take that idea and run with it,” he said. “It is a contest, but at the same time we are presenting real ideas and plans that we can act on to strengthen Farm Bureau and agriculture.”

Both of Ethan’s parents, Ernie and Denise, are Juneau County Farm Bureau members. Since turning 18, he has had his own membership. 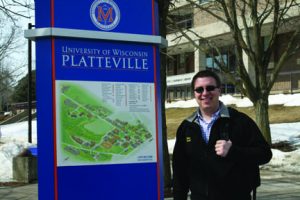 “I always knew as I got involved in agriculture that Farm Bureau was definitely an organization that resonated with me and that I knew I wanted to be a part of. Farm Bureau does a great job of representing Wisconsin farmers in Madison and Washington, D.C.,” Ethan mentioned.

As a UW-Platteville collegiate member, two of his favorite events are Ag Day on Campus and Brag about Ag, where guest speakers talk about ag advocacy.

“I enjoy meeting and interacting with people in agriculture and sharing their stories,” said Ethan. “I’d like to extend this and share with a greater audience. It is all about finding the right avenue to do this.”

Ethan has sought out several writing avenues to reach his audience. Last summer he worked as an intern for the Wisconsin Agriculturist and continues to do freelance work for the publication. He also writes for Filament Marketing and Hay & Forage Grower magazine. He works part-time in the public relations department of UW-Platteville’s University Information and Communications Office.

“My experiences in journalism have allowed me to meet with a diverse cross-section of farmers and agriculturists,” he said. “From people who are small farmers that direct market their product to some of the largest farms in Wisconsin. It is really interesting to see what is going on in this industry and to be able to put their stories into words for others to enjoy and learn from.” 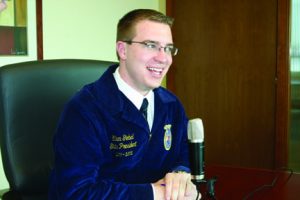 His leadership in agriculture is tied back to his FFA roots. Serving as his chapter’s president for three years, he said his advisors at Mauston always gave him tools that empowered him to practice his leadership and grow in his character.

Ethan served as a state FFA officer from 2010 to 2012 with his final year as state president. He continues to motivate FFA members by traveling the nation facilitating leadership workshops through his work for the National FFA Organization.

“One of the biggest things I took away from my FFA experience is the relationships. Relationships with my former teammates, FFA members, advisors and other people in the agriculture community,” Ethan said.

Relationships have driven Ethan to pursue his degree in ag education because according to him, “I like to work with people and see them grow.”

Compiling his diverse agriculture experiences, from his strong writing and speaking skills, to leading and working with people, there are many who would say this jack of all trades is a master in many of them.

Ethan enjoys working on his parent’s 350-acre farm, EDEM Acres, where they raise Holstein dairy steers along with corn and alfalfa.

Ethan Giebel served as the Wisconsin State FFA President in 2011-12. Throughout his FFA career, he owned 11 FFA jackets. That’s a lot of corduroy!

The collegiate Discussion Meet is an activity designed to help members analyze agricultural issues and decide on solutions that best meet their needs. By participating, members build basic discussion skills, develop a keen understanding of important agricultural issues and explore how groups can pool knowledge to reach consensus and solve problems. It is designed to simulate a committee meeting where discussion and active participation are expected from each committee member.