Sticking Up for Dairy

The work at Farm Bureau is never done as we look for ways to better serve you, our members, and be a voice for farmers. Wisconsin Farm Bureau knows that the dairy dilemma is front of mind for

many right now. While some things, like market prices, are out of our control, we have been busy looking for ways to help our dairy farm families.

On July 6, WFBF coordinated a letter that was signed by 36 other groups and sent to FDA Commissioner Scott Gottlieb.

The letter expressed displeasure with the FDA’s lack of enforcement of the term ‘milk’ on the labels of imitation dairy products and asked for the issue to be addressed immediately.

We organized this letter because you, our members, are frustrated with the status quo of zero enforcement by FDA and frankly, so am I.

Besides the fact that the lack of enforcement has harmed the financial viability of more than 40,000 dairy farm families, plant-based beverages are not held to the same standards of identity as milk. Even more so, according to Food Allergy Research and Education, more than 15 million Americans have a food allergy, and of those, nearly 6 million are children under the age of 18. Mislabeling nut-based or other allergen-based products as ‘milk’ can have severe consequences to public health.

After the letter was sent, three other state Farm Bureau presidents and I met with Commissioner Gottlieb and senior agency staff. 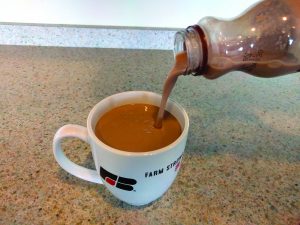 Commissioner Gottlieb was understanding of the many issues facing America’s dairy industry and we had a productive conversation about the proper procedure moving forward to address this issue.

We reminded him that the failure of the FDA to administer current regulations runs counter to the stated goal of the White House to enforce regulations and bring accountability to those who violate the rule of law. FDA is legally required to uphold the law.

We also discussed the frustration with the agency being OK with the lack of enforcement.

I truly believe that Commissioner Gottlieb understands the pressure of the farm economy right now. Following our meeting he publicly said that he plans to follow through on the process the FDA has in place to work through the standards of identity. I’m encouraged by this but not counting it as a win, yet.

We still have work to do. The labeling battle has not been won, but rather just started. The commenting period is open and we want to spread the word and encourage you to voice your opinion on the matter. As Farm Bureau members, we know first-hand that the voices who show up are heard. Visit www.regulations.gov/docket?D=FDA-2018-N-2381, to share your opinion on how these products should be labeled. Comments must be received, either electronically or in print, by October 11.

Our organization is proud to have multiple members serving on the newly-appointed Wisconsin Dairy Task Force 2.0. This group of 31 dairy farmers, milk processors and allied organizations have a challenge in front of them as they look for some solutions to help the $43.4 billion dairy industry in our state. We hope to see the task force discuss topics such as milk contracts, milk movement and milk research.

For months WFBF has been working on dairy concerns and we are happy that there is now a formalized effort with multiple stakeholders taking place.

We know there is still a lot of work to do, but a progress report is always a good thing to share.

Jim Holte was elected president of the Wisconsin Farm Bureau Federation in 2012. He was elected to the WFBF Board of Directors in 1995. He represents District 9 which consists of the Barron, Chippewa, Dunn, Pierce, Polk, Rusk, Sawyer and St. Croix county Farm Bureaus as well as the Superior Shores County Farm Bureau (made up of Ashland, Bayfield, Douglas and Iron counties). Jim was elected to the American Farm Bureau Federation Board of Directors in January of 2015 as a representative of the Midwest region. Jim grows corn, soybeans and alfalfa on 460 acres of land south of Elk Mound. He also raises beef steers. He and his wife, Gayle, have two children and five grandchildren.