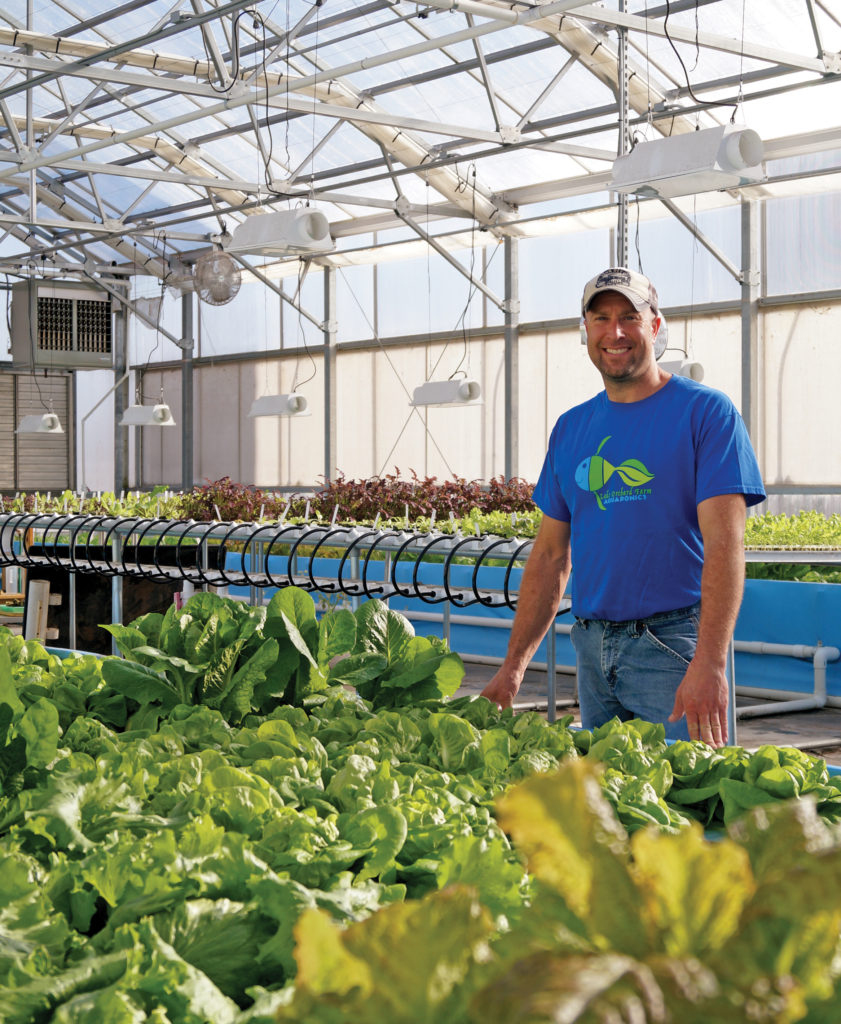 Located on the bank of Lake Michigan, you wouldn’t believe what’s behind the door of a former milking parlor.

In 2014, after consulting with Nelson and Pade, Inc., the family started moving out heifers to make way for the transition to raising fish and produce.

“Aquaponics attracted me because of its stability and sustainability,” said Calkins.

Nate and his wife, Mary, started the aquaponics business after deciding they didn’t want to try and compete in an oversupplied dairy market. Mary’s parents had been raising replacement heifers on the farm. 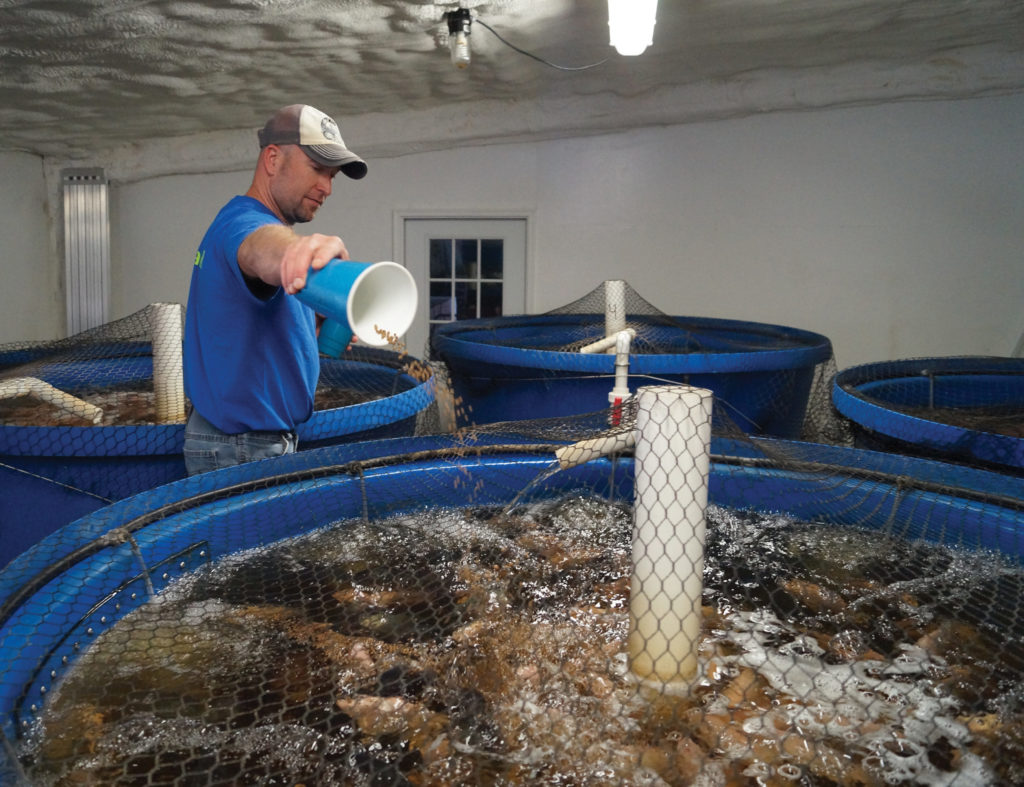 As you walk through the remodeled barn you see plastic tubs and an aquaponic water system. Now, tilapia swim in tanks where the heifers used to stand.

Located next to the barn is a greenhouse. Inside, you won’t find soil, just plants and water. On an early Wisconsin winter day, there wasn’t a chill to be found in the flourishing greenhouse, which was about 85 degrees and increasing.

Compared with hydroponics, the Calkins can have a system that includes nutrients from the fish manure to feed the varieties of lettuce and other produce such as kale, arugula and micro-greens. 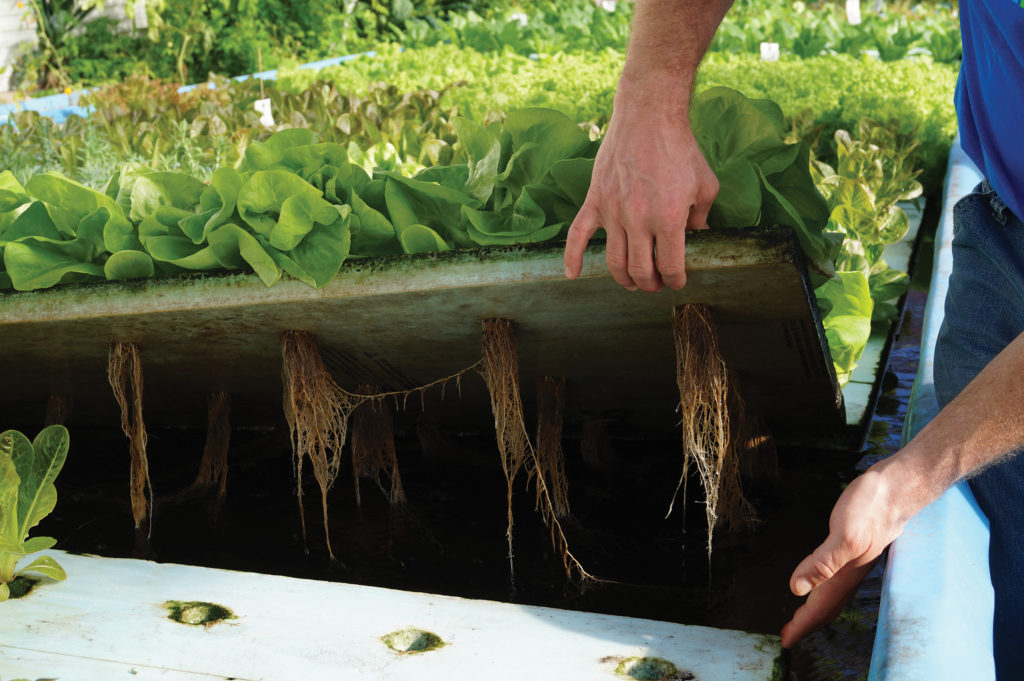 On average, they have 1,200 tilapia in the facility that includes a separate closed-system that acts as a nursery. The system was previously studied by UW-Madison professors and students so they could learn more about the impact of aquaponics on farm-raised fish. Much like livestock, the comfort and environment of the fish impacts appetite and manure output.

“Fish eat things that are much more of a stable market than other livestock,” said Calkins. “We can rely on the bills being the same. That’s what drove us to it. We’ve had less than a three percent increase in costs since starting. That’s lower than normal inflation.”

The fish are manually-fed six times a day. While feeding keeps a demanding schedule, the price tag associated is minimal. Feeding the fish costs about $700 per month.

“By feeding fish, not only am I saving myself on nutrients, but I get the fish to harvest and sell,” said Calkins.

The Calkins harvest about 25 pounds of fish fillets each week, which is sold mostly retail after it’s processed at a local meat market.

Farming in water has similarities to farming in soil but also has several differences.

“For example, if you have dye and put it in water, it spreads to everything, which makes everything consistent and even,” said Calkins. “When growing in soil you have certain areas you have to focus in on. That’s not the case with aquaponics. Your water is everything.”

“Our outcomes are always the same,” said Calkins. “There’s no chance for deformity because there is nothing that the produce can hit (such as stones or roots). Plus, the greenhouse filters harmful rays, so the leaves are not deformed or burned.”

Many chefs are attracted to the consistent quality in the produce and intense flavor, making them repeat customers.

“Chefs really love our micro-greens because they are so flavorful,” said Calkins. “One chef told me he can use much less of our parsley than he normally does because of the taste.”

The Calkins chose not to pursue organic certification, but instead take pride in an all-natural label.

“When we started, aquaponics couldn’t be recognized as organic,” said Calkins. “Even though that has changed, we have good products and don’t feel we need the organic label to sell our products.”

Without using any pesticides or herbicides, they produce more than 1,100 heads of lettuce each week.

The owners particularly take pride in the low amount of water used.

“It’s crazy just how little water we need to grow things,” said Calkins. “We use about a quarter of what a normal household uses yearly.”

Water is readily available with good wells and Lake Michigan in their backyard, but Calkins knows that water is a precious resource and should be monitored and cared for appropriately.

“We are lucky to have a lot of water, but that doesn’t mean that I should abuse the access.”

Calkins cares about using his resources responsibly, growing high-quality produce and humanely raising animals, which is not much different than most other farmers.

“You have to be a jack of all trades,” said Calkins “I’m not only raising produce but fish, too. Many farmers are raising a stock, to get manure and using that to grow plants. I’m doing the same.”

Nate and Mary also own an event barn and a bed and breakfast. To learn more about Lake Orchard Farm Aquaponics, visit lakeorchardaquaponics.com.