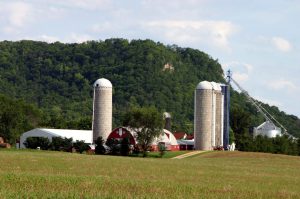 Wisconsin’s use-value assessment law taxes farmland at the value of its use, as opposed to its market value if sold.  It aids farmers and protects Wisconsin farmland from development by providing a property tax formula reflecting the income farmers can generate from using that land for agriculture.

In 1974, Wisconsin’s legislature amended the state constitution’s Rule of Uniform Taxation to allow for differential assessment of farmland. The measure was enacted into the Wisconsin Constitution after being passed at public referendum. This change never came into play until over 20 years later in 1995.

1995 Act 27 provided for use-value assessment of agricultural land. Act 27 directed the Wisconsin Department of Revenue (DOR) to develop property tax formulas taxing this land at the value of its use, or the income it could generate if farmed, instead of its market value.

The law was intended to keep land in production agriculture rather than be developed. In the mid-90s, high property values, leading to high property taxes, existed relative to low farm income. This scenario was forcing many farmers to sell land to developers, especially in growing suburban areas surrounding cities.

Act 27 also created the Farmland Advisory Council to advise and make recommendations to the DOR on use-value assessment.

The law was first planned to be phased in over a ten-year period from 1998 to 2008, but low farm incomes led the DOR to move to full implementation in 2000.

Formulas for calculating the use-value of agricultural land have varied over the course of its existence in Wisconsin. For purposes of use-value, land in agricultural use is classified into four different categories. Grade one land is the most productive land, while grade two is moderately productive land. Grade three represents the least productive tillable land, and a fourth category exists for untillable pastureland. The current formula, adopted in 2005, calculates the use-value of land on a formula that divides potential net farm income from the production of corn per acre by farm interest rates plus municipal tax rates.

The use-value law also incorporates a conversion penalty for agricultural land sold for non-agricultural use. A percentage charge is assessed based on the number of acres converted and the market value the land was sold at with relation to the current use-valuation in the municipality.

Use value assessment has survived two court challenges. The first, Norquist vs. Zeuske, dealt with the basic constitutionality of use-value. The Supreme Court dismissed that lawsuit in 2002, upholding use-value as legal.

Mallo vs. Department of Revenue dealt with the DOR’s early implementation of the law, with the plaintiffs claiming the DOR could not implement administrative rules that superseded the legislature’s intended phase-in period. The Supreme Court ruled in 2002 that DOR was indeed able to speed the implementation because the legislature had not directed that the full ten years must be used.

The Farmland Advisory Council meets each fall to establish use-value assessment rates for all classes of agricultural land in each municipality for the upcoming tax year. The Wisconsin Farm Bureau Federation supports use-value assessment, as it ensures the ability of Wisconsin family farmers to remain profitable while protecting one of our state’s most important resources, farmland.